[dropcap color=”#008040″ boxed=”yes” boxed_radius=”8px” class=”” id=””]T[/dropcap]he no frills, on-time, no-nonsense, tough attitude InterGlobe Aviation on Monday said it intends to settle about Rs.1,166 crore ($180 million) debt from the proceeds of its initial public offer (IPO) which is set to begin from next week. The company which owns the budget passenger carrier IndiGo plans to raise over Rs.3,200 crore ($494 million) from the IPO next week. The IPO proceeds, the company said will be used to retire a part of its total debt of over Rs.3,900 crore ($602 million).

According to the company’s president Aditya Ghosh, the total debt of over Rs.3,900 crore ($602 million) has been accumulated on the account of aircraft purchases. 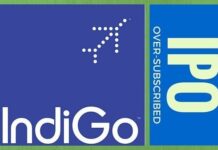 Indigo IPO over-subsribed on Day 2 too

Sri Lanka bans the import of 300 items of consumer goods...