[dropcap color=”#008040″ boxed=”yes” boxed_radius=”8px” class=”” id=””]O[/dropcap]n April 28, while arguing its petition to press the Modi government to hold talks with all stakeholders so as to resolve the ongoing crisis of violence in the Valley, the J&K Bar Association expressed its view that the accession of J&K State to India is “controversial”. Clearly, the Association was either as ignorant as our political Pappus or else playing as a “separatist” backing the Geelanis and similar agents of Pakistan.

…the 562 Princely States, which were independently administered but were under the overall British paramountcy, were given the power to accede to either Dominion by signing the document called the Instrument of Accession.

Before we come to the J&K  Instrument of Accession (IoA), it is necessary to understand what the IoA was and why it came about.

The IoA was an integral part of the British Independence Act, 1947, when, on June 3 of that year, Her Majesty’s Government submitted a plan that, inter alia, provided for the creation of two independent  dominions out of the  provinces comprising British India; these were to be on the basis of Muslim majority and Hindu majority areas. However, the 562 Princely States, which were independently administered but were under the overall British paramountcy, were given the power to accede to either Dominion by signing the document called the Instrument of Accession.

[dropcap color=”#008040″ boxed=”yes” boxed_radius=”8px” class=”” id=””]T[/dropcap]he Crown Representative, Lord Mountbatten, made it clear on July 25, 1947, that though legally independent, these Princely States had to accede to one or other of the Dominions, keeping in mind the “geographical contiguities” of the States. Accession, he told them, contemplated surrender to the Central Government of only three subjects: Defence, External Affairs and Communication. The draft of this IoA was finalized by the body called Chamber of Princes under the supervision of Lord Mountbatten. And that finalized version was the one which had to be signed by the Ruler of each of the Princely States that numbered 562.

A facsimile copy of Maharaja Hari Singh’s IoA is shown in below. It was published in “BJP Today” magazine 16 years ago.

Hari Singh, Maharaja of Jammu & Kashmir, could not make up his mind on which Dominion to accede to. The Pakistan tribal invasion into Srinagar on October 22, 1947, which plundered and ravaged citizens there, finally made him to accede to the Indian Dominion.

A facsimile copy of Maharaja Hari Singh’s IoA is shown below. It was published in “BJP Today” magazine 16 years ago.

Now, it is true that the J&K IoA to India has been the subject of one of the biggest and long drawn controversies in independent India. “Does it really exist?” That has been the question of pro-Pakistanis.

[dropcap color=”#008040″ boxed=”yes” boxed_radius=”8px” class=”” id=””]O[/dropcap]ne academic, Prof Alistair Lamb, doubted its authenticity and dismissed its very existence. Some said that Maharaja Hari Singh was not the one who signed it. Others opined that what he had signed was different from what other Rulers of other Princely States had signed. Others said that Hari Singh had signed an IoA that only permitted the Dominion of India to make and implement laws relating to the subjects of external affairs, defence and communications. And some said that Hari Singh’s IoA had a date different from that in the IoA prescribed by the British Government.

But you can be almost sure that the “separatists” and Pak protagonists wearing black coats of their profession will raise more issues other than Hari Singh’s IoA.

These and other doubts were looked into by one Venkatesh Nayak,  an RTI activist who, besides being a history researcher based in New Delhi, worked with the Commonwealth Human Rights Initiative. On the basis of an RTI inquiry, he was invited to access the document in the National Archives under the Public Records Act, 1993. After a thorough study of various documents and research, Nayak concluded – in The Wire of 26th October 2016 – that “I can confirm that the J&K IoA exists for real, is safe and well preserved in the collection of the National Archives.”

Sadly, that article has remained unknown to the J&K Bar Association members who seemingly prefer to toe the line of the “separatists”, aka Pakistani agents. One hopes that our country’s knowledgeable and no-nonsense Attorney General cites the above article in the apex court when the hearing on the present case is scheduled to resume on May 9.

But you can be almost sure that the “separatists” and Pak protagonists wearing black coats of their profession will raise more issues other than Hari Singh’s IoA. There is bound to be the cry regarding the non-implementation of the UN’s Plebiscite Resolution of August 13, 1948, the Shimla Agreement of July 2, 1972 which made the K problem a dispute yet to be resolved between India and Pakistan, the K-issue still remaining under the UN agenda etc.

We will come to those issues soon enough.

Copy of J&K’s IoA to India 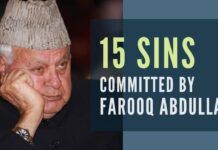 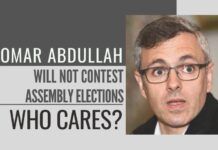 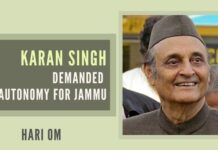 Karnataka Politics in a state of flux