Musings of a Congress Party worker…
[dropcap color=”#008040″ boxed=”yes” boxed_radius=”8px” class=”” id=””]W[/dropcap]hat has become of our great organisation? Instead of a party that fired the imagination of the masses throughout the length and breadth of India, we have shrunk, losing touch with the toiling millions, said Rajiv Gandhi while addressing the Congress centenary session in Bombay (now Mumbai) on December 28, 1985.

Why are Congress leaders so reluctant to look beyond Sonia Gandhi and Rahul Gandhi?

History seems to be, like always, repeating itself. The “great organisation” India’s prime minister was referring to needs an urgent leadership change to stem the rot. As one of the staunch Nehru-Gandhi family loyalists, M.L. Fotedar, has recently stated, the Congress is on the verge of a collapse. “However, this time there is no saviour,” writes the former union minister and serving Congress Working Committee member in his soon to be released book, “The Chinar Leaves”.
If one is to ask a devoted Congress worker, the scenario is really bleak. A political party which was guided by intellectual giants like Mahatma Gandhi and Jawaharlal Nehru, and which has ruled India for around 50 years in the last seven decades or so, has been reduced to the ignominy of occupying just a handful of the opposition benches.
[dropcap color=”#008040″ boxed=”yes” boxed_radius=”8px” class=”” id=””]T[/dropcap]ime is running out fast for the dynasty which has been at the helm of the Indian National Congress for most of the last seven decades or so. With the electoral fortunes of the Congress hitting its nadir last May – winning just 44 of the Lok sabha’s 543 elected seats – the delinking of the historic political organisation from the Nehru-Gandhi family is a historic necessity which the Congress leadership can ignore only at its peril.
Sonia Gandhi is rightly credited for her role in saving the oldest Indian political party from oblivion in 1998, but she is well beyond her prime. The Congress president needs to be shown the script of her inaugural speech on April 6, 1998.
“I have come to this office at a critical point in the history of the party. Our numbers in parliament have dwindled. Our support base among the electorate has been seriously eroded. Some segments, including Dalits and minorities, have drifted from us…”We are in danger of losing our central place in the polity of our country as a central party of governance,” Sonia Gandhi had said.
[dropcap color=”#008040″ boxed=”yes” boxed_radius=”8px” class=”” id=””]G[/dropcap]andhi is credited with devising plans to revitalise the party by “reinforcing the role of ordinary workers and creating a representative and responsible organisational structure of the party” in 1998. But, in 2015, Rajiv Gandhi’s widow can be accused of “losing touch with the toiling millions”.
To make the scenario even more depressing for a brooding Congress worker, the only alternative being presented by an organisation in denial is Rahul Gandhi. It would be naïve to expect Rahul Gandhi of upping his leadership ante and provide effective leadership to one of the largest political organisations in the world.
It would be unkind to expect a “reluctant politician” to lead the second most populous country on the planet. It would be also unreasonable if that reluctant politician happens to be Rahul Gandhi – the same person who is accused of copying a simple condolence message to the victims of the Nepal earthquake from his mobile.
[dropcap color=”#008040″ boxed=”yes” boxed_radius=”8px” class=”” id=””]W[/dropcap]hy are Congress leaders so reluctant to look beyond Sonia Gandhi and Rahul Gandhi? How can one justify such a bankruptcy of leadership from a party which still has some credible intellectuals in its ranks? The 2014 parliamentary election results provided a wonderful opportunity to push for a leadership change but it has been wasted by those for whom the Congress starts and finishes with: Nehru-Gandhi family.
“The dilemma before Sonia Gandhi was that on the one hand she could not do without her coterie while on the other hand she had an overriding desire to see her son succeed in politics,” Fotedar writes in his book.
Justifying the Pavlovian conditioning the Congress leadership is often accused of, Sonia Gandhi – and the unofficial heir-apparent Rahul Gandhi – have been completely absolved of the responsibility of bringing the Congress to such a pathetic status.
To again quote from Rajiv Gandhi’s above-mentioned Bombay speech: The revitalisation of our organisation is a historical necessity.
[dropcap color=”#008040″ boxed=”yes” boxed_radius=”8px” class=”” id=””]T[/dropcap]he voices of those refusing to “go gentle into that good night” are beginning to be heard. “History is threatening to repeat itself. It is a matter of time before Soniaji’s and Rahul’s leadership is challenged from within the party. I will be observing closely how they stand up to this looming challenge, because Sonia is not Indira and Rahul is not Sanjay,” Fotedar says.
It would be interesting to see who would challenge the mother-son duo and how many CWC stalwarts would stand behind the challenger. It would also be interesting to see whether the Congress would decide to go for the makeover at the top or disappear into the annals of history. 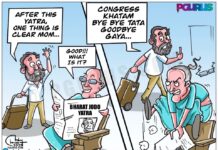