Wilful defaulters should be jailed

The Wilful defaulters of bank loans should be jailed said the former Union Finance Minister Yashwant Sinha on Tuesday.

[dropcap color=”#008040″ boxed=”yes” boxed_radius=”8px” class=”” id=””]W[/dropcap]hile replying to a question from the speaker Ram Niwas Goel on non-performing assets (NPAs), sinha, said that people who take loan from the banks in the name of business/industry but instead spent the money for their luxury or in other things making it a non-performing asset (NPA) were wilful defaulters at the orientation session of the Delhi assembly on the budget.

“This comes under the category of wilful defaulters and since it is done with a criminal intent so they should be treated like a criminal and should be sent to jail,” he said.

He however mentioned that there were two other categories of NPAs which do not come under wilful default.

The Aam Aadmi Party (AAP) had approached the Bharatiya Janata Party leader for addressing an orientation session of Delhi legislators on the budget.

During the session, Sinha explained the political dimensions of planning a budget and informed the gathering about the intricacies of a budget and its terminology.

Addressing the legislators and the state finance department officials, he stressed the need of strengthening the laws dealing with the financial crimes in the country.

“We need strong and swift implementation of the laws for financial crimes,” Sinha said.

Legislative Assembly Secretary Prasanna Kumar Suryadevara had earlier said that most of Delhi MLAs are first-timers and require guidance on the budget from experienced people such as Sinha. 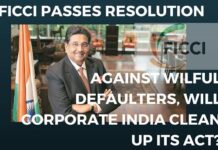 Transport Ministry allows vehicles to have maximum 3 decks to transport...