Karnataka to provide seed funding up to Rs.50 lakh to 200 startups

The Minister for IT/ BT and Skill Development, C N Ashwath Narayan, Karnataka announced that 200 startups will be provided with seed funding of up to Rs.50 lakh each in the current year. The move will help to promote technological innovation in the state.

The Minister was speaking on the occasion of the first ‘National Startup Day‘ event observed at Vidhana Soudha. Narayan said, “This being the year of Azad Ka Amrit Mahotsav (75th year of Independence), the seed funding will be facilitated to additional 75 startups, to achieve the tally to 200 startups in the year.”

In the current year, the state has so for attracted Rs.1.60 lakh crores of foreign direct investment, which is more than 50 percent of the investment made in the entire country.

“The state is home to over 13,000 startups out of the total 57,000 in the country. In view of maintaining the leading position of the state in the sector the stress on digital education and skill development will be focused through effective implementation of NEP,” he explained.

Earlier, Prime Minister Narendra Modi had said, that the role of startups will be crucial in India becoming ‘Vishwaguru‘ and ‘super power’. Going forward along the lines of the Prime Minister’s thought, the growth of hardware will also be facilitated together with software in the state.

“ART part (Artificial Intelligence and Robotics Translational Park) set up at IISc stands as a testimony to the commitment towards the growth of emerging industries,” Minister added.

Further, under the ESDM policy, Rs.5,000 crores will be given as subsidy, and out of this Rs.2,000 crores has already been given in the first year, Narayan said.

The Union government has observed the ‘Startup India Innovation Week‘ from January 10 – January 16 and has announced national rewards for the startups for their innovative product development. Out of the total 56 startups who bagged the reward, 14 are from Karnataka to put the state on top in the country.

Karnataka CM Bommai said, “Karnataka will play a major role in realizing Prime Minister Modi’s dream of making India a USD 5 Trillion economy. Through startups, a new Karnataka would make a significant contribution to the economy of New India.” He hailed the Prime Minister for encouraging the youth to inculcate scientific thinking to face new challenges.

“Karnataka is set to play a big role in the nation’s economy in the future. It is a matter of pride that out of 54,000 startups in the country 13,000 are in Karnataka. Karnataka government has taken a slew of measures to encourage setting up of startups.” Bommai said. 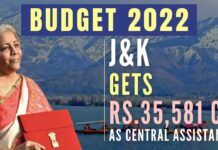 Prime Minister Modi to chair Global Investor Roundtable on November 5. Top Pension and Sovereign Wealth Funds from across the world to participate