The Kerala High Court has expressed its ire and concern over the rising instances of employees stealing money from the famed Sabarimala temple.

A division bench of the court was hearing the report of a theft by an employee attached to the Travancore Devasom Board (TDB), the temple’s custodian, and asked the board’s Chief Vigilance Officer to maintain constant vigil of the entire activities in the ‘Bhandaram’ (where the money offered by the devotees at the temple is kept).

According to the report which the Court got, on January 8 at 12.45 p.m., an employee who was engaged in counting currency notes of the Bhandaram committed theft of Rs.3,500 and was apprehended by the TDB Vigilance wing.

He was sent to judicial custody, after a case was registered against him under Section 381 of the Indian Penal Code, 1860.

A Division Bench comprising Justice Anil K Narendran and Justice P G Ajithkumar were adjudicating upon a report filed by the Special Commissioner of Sabarimala regarding the theft of currency notes from the Bhandaram by an employee engaged in Sabarimala duty when it observed so.

The bench said, “We deem it appropriate to direct the 4th respondent Bhandaram Special Officer, Sabarimala, and also the 5th respondent Chief Vigilance Officer to have constant vigil of the entire activity in the Bhandaram at Sabarimala Sannidhanam in order to prevent any theft of money, offerings, etc., by the employees engaged for counting currency notes, coins, offerings, etc. Stringent action shall be taken against the commission of any such offence by the employees.”

Earlier in another incident on December 16, 2021, a TDB employee, engaged to count currency in the Bhandaram, was found stealing money after Rs.42,470 was recovered from his room after a search.

The two-month-long temple season, which began on November 16 with Covid protocols, will end on Saturday and even though the season began on a soft note, things changed and by now over 2 million devotees had pre-booked their visit and the total collections, according to unofficial reports, have crossed over Rs.120 crore.

The Sabarimala temple is the biggest revenue earner for the TDB, which oversees the functioning of most temples in the south and central districts of the state. 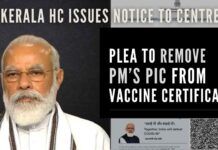 ‘Halal’ marking on jaggery packs received at Sabarimala Temple as a supplier also exports to Arab nations: Devaswom Board to Kerala High Court 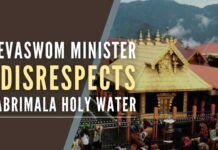