[dropcap color=”#008040″ boxed=”yes” boxed_radius=”8px” class=”” id=””]W[/dropcap]hy is it that there is a striking similarity between the views of the Congress, communists, and Beijing over the Logistics Exchange Memorandum of Agreement (LEMOA)? The landmark pact that Narendra Modi’s government has signed with the United States is surely a big achievement—and it would have been historic had he garnered enough courage to go the whole hog.

Beijing’s anxiety is understandable, for it is a bully and it fully comprehends the danger the new pact poses to its wayward ways, the recent instance being its brazen rejection of international arbitration in South China Sea. So, the Global Times of China, reflecting the official position, said in an editorial, “If India hastily joins the US alliance system, it may irritate China, Pakistan, or even Russia.” LEMOA, it said, “may not make India feel safer, but will bring strategic troubles to itself and make itself a centre of geopolitical rivalries in Asia.”

…India has now become a half-ally of the US. It would be better if we become a full ally.

The tone and tenor of the editorial is clearly intimidatory: don’t get buddy up with America, or else…

[dropcap color=”#008040″ boxed=”yes” boxed_radius=”8px” class=”” id=””]T[/dropcap]he Communist Party of India (Marxist), which is generally pro-China, is also upset. It said that the Modi government has “compromised on Indian sovereignty and surrendered its strategic autonomy” by signing this agreement with the world’s “most powerful imperialist country.”

The CPM has got some cheek: the party that supported China during the 1962 war now pontificates about India’s sovereignty and strategic autonomy.

In the communists’ scheme of things, China—which disregards international rules, proliferates nuclear and other weapons of mass destruction, supports rogue nations, and shields notorious jihadists—is good, while the US, which wants to have close relations with India, is evil. If they had their way, India would have to abandon all its national interests in favor of the country ruled by their ideological brethren.

This was exactly what happened in the decades following Independence. It was the period in which communists wormed their way into the establishment, Krishna Menon being the prime example—a communist undermining India’s foreign policy and wrecking national security: 1962 was the denouement. The Congress almost blindly followed a foreign policy whose contours were drawn by communists like Menon, with full support from Jawaharlal Nehru. Unsurprisingly, India became a camp follower of the USSR.

[dropcap color=”#008040″ boxed=”yes” boxed_radius=”8px” class=”” id=””]T[/dropcap]herefore, the Congress’ reaction to the landmark pact, which is intended to discard the Nehruvian baggage, was on expected lines. “Signing of LEMOA is a fundamental departure from India’s time-tested policy of ‘strategic military neutrality.’ It raises a genuine and grave apprehension regarding India being unwarrantedly drawn into an operational military design in Asia-Pacific Region and the Middle East,” Congress chief spokesman Randeep Surjewala said in a statement.

This is pure rubbish, for the so-called strategic military neutrality—in fact, the entire non-aligned movement—was nothing but a clever ploy to make India a follower of the erstwhile Soviet Union. This was the reason that while the Nehru-Menon duo was acerbic in its condemnation of the Western powers during the Suez Crisis of 1956, its criticism of the USSR’s invasion in Hungary at the same time was muted. Nehru called the happenings in Hungary as “a civil conflict” marked by “mutual killings,” while on the same day Krishna Menon voted against a UN Resolution that sought the withdrawal of the Soviet troops from Hungary. In fact, Menon called the disturbances in the central European country as a domestic matter.

The duplicity of Nehru and Menon not only shocked the West but also the socialist Jayaprakash Narayan. And how did the communists react to JP’s morally upright stand? By calling him names, by accusing him of conspiring with the “fossilized Gandhians” and reactionaries to undermine non-alignment.

The same communist-inspired, if not -authored, non-alignment policy was responsible for India’s hushed or ambivalent responses to the Soviet invasions of Czechoslovakia in 1968 and Afghanistan in 1979. Worse, the tremendous intellectual influence of communists, which has always been greatly disproportionate to their political strength, has molded generations of diplomats in our country. They have been infected with toxic anti-Americanism over the decades; the severity of the virulence has decreased over the years, but it still there; the most recent example was Prime Minister Modi’s espousal of non-alignment in an interview to the Wall Street Journal after the completion of two years.

LEMOA is a breach with the past, but not a complete breach, for the agreement does not create any obligations on either party to carry out any joint activity. It does not provide for the establishment of any bases or basing arrangements. It may be mentioned that the Obama administration has been insisting on closer military ties between the two biggest democracies but India has been reluctant and diffident.

In a way, India has now become a half-ally of the US. It would be better if we become a full ally.

Reproduced from The Hindu Chronicle. Formatted for better viewing. 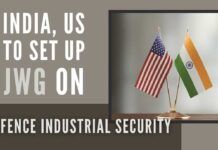