[dropcap color=”#008040″ boxed=”yes” boxed_radius=”8px” class=”” id=””]T[/dropcap]he U.S. Commerce Department on Monday announced its preliminary affirmative determination in the antidumping duty (AD) investigation against imports of truck and bus tires from China, signaling that it may impose punitive duties on the products.

The department said that such products from China had been sold in the United States at dumping margins of 20.87 percent to 22.57 percent.

As a result of the preliminary affirmative determination, the department will instruct U.S. Customs and Border Protection to require cash deposits based on these preliminary rates.

The U.S. Commerce Department launched AD and countervailing duty investigations against imports of such products from China in February 2016, in response to a request from United Steelworkers based in Pennsylvania.

The department is scheduled to make its final determination in January next year, unless the statutory deadline is extended.

[dropcap color=”#008040″ boxed=”yes” boxed_radius=”8px” class=”” id=””]P[/dropcap]unitive duties would be imposed after both the Commerce Department and the U.S. International Trade Commission (USITC) make affirmative final rulings. The USITC is scheduled to make its final determination in March, 2017.

Imports of these products from China were estimated at about 1.07 billion U.S. dollars in 2015, according to U.S. official data.

China’s Ministry of Commerce has repeatedly urged the United States to abide by its commitment against protectionism and work with China and other members of the international community to maintain a free, open and just international trade environment. 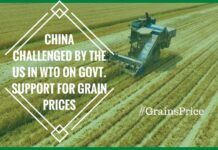