Since the IIT-M campus gates were opened for these elements, the quality and standard of the institute took a drastic plunge

Old-timers and old students cherish the time they spent at the Indian Institute of Technology-Madras (IIT-M) as the most precious days of their lives. “There was a sense of elegance and aristocracy associated with this institution. It was a typical Gurukul system but not anymore,” a prominent IITian told PGurus about the state of affairs in the country’s one-time premier technological institution.

Today’s IIT-M stands for Institute for Immoral Traffic-Marxists if the goings-on in this establishment are any signs. The Faculty, who used to enjoy unlimited academic freedom and were once respected and adored by the students are afraid – very afraid. So much so that many of them have been forced to remove even the ring tones of their mobile phones which used to play devotional songs like “Sree Ranganatha…” for fear of retribution by the Marxist-Maoist-Mulla (MMM) gang in the campus.

Former students with whom PGurus had a free exchange of ideas and views about IIT-Madars were of the opinion that the downfall of the institution began with the launching of the integrated humanities courses.

Since 2004, the IIT-M campus has been converted into a hub of anti-national activities. It reached new heights following attacks and vandalism on the peace-loving Jain students in the IIT-M who prefer to live a pious life as prescribed by their religion. But what has shocked the students and faculty on the campus was a series of suicides by students during the last four years, the last one being a girl named Fathima Latheef[1], a Keralite student of the five-year Integrated Humanities course in November 2019.

The Left-wing students and the Periyarites who have unleashed a reign of terror in the campus accused a Brahmin teacher for Fathima’s suicide. But the recent developments in the IIT-M campus has given a new twist to the whole incident. A girl student who is also a Leftist has accused the leaders of the Students Federation of India (SFI) and Periyarites (those who follow the lifestyle of late E V Ramasamy Naicker, an anarchist and founder of the Dravida movement) of sexually assaulting and exploiting girl students. In a Facebook posting, (which has since disappeared strangely from the social media) she blamed the Left-Periarite combination for Fathima’s suicide.

Not only that, in another incident, which was blacked out by the media in Chennai, but two student leaders of IIT-M were also arrested by the Chennai Police following the complaint lodged by a girl student of sexual harassment. Though the IIT-M officials including Prof Shiva, dean student, feigned ignorance about the whole issue, the Kotturpuram Police told PGurus that a student by the name of Justin Joseph has been arrested on charges of misbehaving with girl students.

The girl who wrote on Facebook that Fathima was a martyr of the lustful Left-wing student leaders also said that the charges of sexual molestation are true. “It has become a routine affair in IIT Madras campus,” she said.

The humanities wing was launched to facilitate the entry of anti-national characters and Left-wing activists into the campus.

Arjun Sampath, a Hindu activist who has a considerable following in the IIT-M because of his erudition and scholarly speeches on social issues too posted on twitter;” Sexual harassment in IIT Madras by Ambedkar Periyar Circle. To the best of our info, two guys are suspended for sexual harassment cases from IIT Madras. 1. Justin Joseph (HSS Department-student of Dr. Joe Thomas Karakutti) 2. Jaykrishnan (mechanical department -student of Prof Shaligram Tiwari. The sexual assault case was filed by Prof Chella Rajan’s student of humanities… This is the same girl who wrote on Facebook that all teachers in IIT-M are anti-Pakistan and say so in their lectures. All the accused are hardcore APSC-leftist-Naxal activists,” wrote Arjun Sampath.

Former students with whom PGurus had a free exchange of ideas and views about IIT-Madras were of the opinion that the downfall of the institution began with the launching of the integrated humanities courses. “There is no potential or scope for teaching economics or development studies on the IIT campus. These courses were launched in 2004 when Kapil Sibal, the then Minister for Human Resources Development gave permission to that program,” said a post-doctoral student.

Another alumnus, who is heading a famous educational institute pointed out that the humanities wing was launched to facilitate the entry of anti-national characters and Left-wing activists into the campus. “In the normal course, these SFI and Maoist elements would never be able to manage entry into the IIT M campus. The engineering and technology students are intelligent, hard-working and industrious while the Left and Dalit activists do not have the brains to compete with them. Since the IIT M campus gates were opened for these elements, the quality and standard of the institute took a drastic plunge,” pointed out this professor.

Anarchy rules the roost in the IIT M campus. The director who initially was appointed by the Congress government (read P Chidambaram) made a volte-face and sought the help of a city-based RSS ideologue to get an extension for another term. “He is a man for all seasons and would not hesitate to make another somersault when a new government takes over at Delhi. But if you want to save the IIT-Madras, the only option is to stop the humanities program altogether. There are hundreds of arts and science colleges in Tamil Nadu where these courses could be accommodated. There should be no such programs in IIT Madras,” said the learned professor. 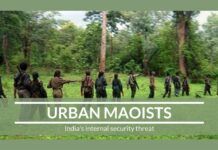