[dropcap color=”#008040″ boxed=”yes” boxed_radius=”8px” class=”” id=””]M[/dropcap]-pesa is the world’s most successful money transfer service. Millions of people who have a mobile phone but no or distant access to a bank account, send and receive money, top-up airtime and pay bills via M-pesa. It can be used large or small scale, person-to-person, to buy vegetables or for customer-to-business (C2B) transactions. M-pesa can also be used as an ATM to withdraw cash or send money to far away family. Some governments use M-Pesa to make welfare and subsidy payments, enabling payment through third-party mobile apps, and providing a channel for charity donations to get uninterrupted into the hands of the people they are intended for.

Pesa means money in Swahili, M is for mobile; in 2007 M-Pesa was launched by the Kenyan operator Safaricom, with UK partner Vodafone’s backing; Kenya is M-pesa’s champion market with circa 20 million (2/3rds of the adult demographic) active users transacting an estimated KSh 15 billion (approx $150 million) daily. Today M-pesa claims a subscriber base of 25 million and a network of plus 261,000 agents in various countries of operation.

In Kenya cashless payments are a revolution in the fight against petty corruption, in a world where people do not carry cash, petty bribes to low level government bureaucrats become easy to detect or difficult. Likewise with traffic cop corruption, often vehicles are stopped for no reason other than paying a recompense not to go to court. M-pesa is a marvellous system evolving to eliminate grassroots bribes, when an officious bureaucrat or bullyish traffic cop demands a sweetener to get something done or undone, people “say of course no problem, let me M-pesa you the money right now, what’s your number?”…So the bribe is either withdrawn or these transactions can be tracked and have to be accounted for, which is great for ordinary people trying to move their lives forward.

In 2014-2015 M-pesa transactions apparently totalled $3.4bn, in September Mark Zuckerbeg (Facebook) arrived in Nairobi “to learn about mobile money”, he denied rumours he was about to acquire M-pesa. Visa Inc., the world’s largest payments network, just introduced a mobile-phone application to enable more wireless transactions in Kenya as a prelude to a pan-Africa program; clearly Kenya leads the way in going cashless and eliminating many elements of grassroots corruption.

Note:
1. The conversion rate used in this article is 1 Kenyan Shilling = 0.01 US Dollar 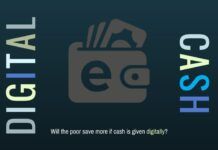 Is the common man willing to receive cash digitally?

NPA resolution – A case of the left hand giving the...