The Australian Foreign Minister Marise Payne announced the ‘Maitri’ Scholarships Programme‘ under which it will provide over USD 11 million for four years to support Indian students to study in Australia’s world-leading universities.

During the joint press brief, the Australian Foreign Minister also announced a series of new initiatives to boost the education and cultural ties between Australia and India.

It further said that the $3.5 million Maitri Grants and Fellowships Programme will build links between our future leaders, supporting mid-career Australian and Indian professionals to collaborate on strategic research and shared priorities.

“The $6.1 million Australia-India Maitri Cultural Partnership will boost the role of creative industries in our economic and people-to-people ties. This partnership will also promote artistic talent and cultural exchanges in our two countries’ world-class visual and performing arts, literature, film, television, and music industries,” said the Australian High Commission in its statement. Can Indian PM Modi Ji mediate in the Russia-Ukraine war? 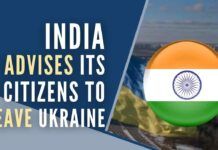 Amid rising tensions with Russia, India advises its nationals to leave Ukraine temporarily