The tiny locality of Sheikh Jarrah in the holy city of Jerusalem has become the reason for the sudden increase in tension & unrest between Israel & Gaza. To understand better what caused this, let us go through the following sections.

Legal angle to the property dispute which triggered the clashes

The current spike cum escalation of tensions between Gaza & Israel was a result of a ruling from the Jerusalem District courts on a disputed piece of land in the locality of Sheikh Jarrah. The ownership of the piece of land lies with the original Jewish owners, however, it was illegally captured by the Trans-Jordan or Jordanians during 1947-48 Israel’s Independence War[1]. During that time it was unanimously maintained that neither Egypt nor Jordan had any legal claim on the lands that were captured. In the next 20 years until 1967’s Six-Day War[2], the Jews have been driven away from these areas which they legally owned and were not allowed to exercise any property rights, and a large number of Arab settled in these areas.

After the 1967 Six-Day War when Israel ended Jordanian occupation, the legislature of Israel passed a law that allowed any person of any ethnicity to have their property rights justified. Where the Jordanian custodian of the enemy property had granted the deed to these properties, their property rights remained intact, but where the Jordanian custodians had held on to the properties, they were returned to the owners via the Israeli Administrator General and Official Receiver. The reason why the tenants of Sheikh Jarrah lack any official ownership is not that Israel has denied the Palestinian Arabs of any property rights that have acquired but, rather, because the Jordanian government had declined to give the Palestinian Arabs the deeds of the lands they had seized.

This issue could be considered as a common example of landlords in this case the original Jewish owners exercising their property rights reaching to the tenants whose leases have expired & who have not paid rent both of which hold for the current Arab-Palestinians living in Sheikh Jarrah.

Hamas & the escalation of violence

Continuing with the context that was provided in the above section, after the Jerusalem District Court’s verdict which ruled in favour of the original Jewish owners whereby it stated that many tenants had long overstayed their leases and tenants who are not even willing to pay rents can be legally evicted, violent clashes & rioting erupted between hardline Palestinian Arabs & extreme Zionists throughout Jerusalem during the holy month of Ramadan in anticipation of a Supreme Court appeal of the ruling. The Israeli police also raided the holy Al-Aqsa mosque which is considered as one of the holiest shrines in Islam and the place of the First Qiblah (the direction which Muslims face while offering prayer) and arrested many Palestinians who were doubted to be causing riots[3]. This action of the Israeli police further aggravated the situation as Palestinians considered this a desecration of their holy shrine.

Subsequently, Hamas which is a terrorist organization as per the USA & Israel and considers itself as the representative of the Palestinians utilized the unrest by firing more than 1000 unguided missiles from Gaza aimed at civilian settlements in Jewish Israel in which incidentally killed an Indian nurse in Ashkelon[4]. Most of these unguided missiles were successfully intercepted by Israel’s Air Defence System (The Iron Dome). As a response to this provocation, the Israeli Defence Forces has launched a targeted response of neutralizing the top Hamas terrorist leadership & disabling its infrastructure using covert tactical teams & precision-guided missiles.

International response to this conflict

This vicious cycle of violence by Hamas by targeting civilians in Israel & the following disproportionate retaliatory action by Israel has the potential to spiral out of control and put the stability of the entire Middle East at stake. India’s Permanent Representative to the United Nations has made a statement asking for restraint from both sides while the Organization of Islamic Co-Operation (OIC) led by the Saudis & Emiratis had issued a strong statement against Israel condemning it and putting it at fault for the death of civilians in Gaza. This conflict has also brought to limelight the stance of the new Joe Biden-led US administration regarding its policies vis-a-vis the Middle East. Secretary of State Anthony Blinken has put out a balanced statement in which he expressed concerns about the rising number of civilian deaths due to Israel’s disproportionate response but has also made a clear distinction between Hamas targetting the civilian population in Israel & Israel targeting the terrorists[5]. 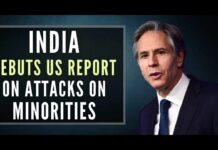 India rebuts the US. Avoid ill-informed, assessments based on motivated inputs, biased views