The United States‘ botched-up troop withdrawal from Afghanistan after a bloody 20-decade old war against the Taliban & the Al-Qaeda factions and the recent deadly suicide attack by the ISIS-Khorasan faction at the Kabul airport raises many questions about the harsh & violent future that awaits Afghanistan. The multiple jihadist factions that are vying for control could very well put Afghanistan at the center of global jihad & it could very well slip into a bloody civil war[1]. This also warrants a detailed understanding of the sinister nexus between the Pakistani Inter-Services-Intelligence (ISI) & the Haqqani Network (H.N) who are major players in the power spectrum in Afghanistan.

The Haqqani Network (H.N) is a Sunni Islamist terrorist organization founded by an Afghan warlord Jalaluddin Haqqani during the 1980 Afghan War against the Soviets and is currently headed by his son Sirajuddin Haqqani. It primarily operates out of the tribal belts of North Waziristan in Pakistan and conducts extremely violent terrorist attacks in Afghanistan against the US, NATO & Indian establishments.

The recent suicide bombing by the ISIS-Khorasan at the Kabul airport raises legitimate questions regarding the involvement of Pakistan’s ISI.

Its close ties with the multiple extreme jihadist factions of ISIS including ISIS-Khorasan, the Taliban, the Al-Qaeda, and its complex web of logistic chains that it has skillfully woven through decades using extortion, narcotics, smuggling to fund its terror activities makes it one of the most dangerous terror outfits in the world.[2]

The relationship between the ISI & the H.N is a symbiotic one. The H.N’s influence among various jihadist groups in Afghanistan is of importance to Pakistan as it helps Pakistan’s influence in Afghanistan through non-state actors. The H.N has also helped to strengthen Pakistan’s control in the tribal Federally Administered Tribal Areas (FATA) regions. In return, the ISI provides a safe haven to H.N’s terrorist camps in Pakistan which the H.N uses to launch attacks on US & NATO forces, the Afghan Defence forces, and also against India through other terror groups like the Lashkar-e-Taiyyaba, ISIS-Khorasan, etc.[3]

Rise of Pashtun nationalism & its ramifications

With the Afghan Taliban coming to power in Afghanistan, the Tehrik-e-Taliban Pakistan (TTP) will get emboldened as they would get support from the faction of the Afghan Taliban who supports the violent struggle of TTP against Pakistan for a greater Pashtun nation. In the past, the TTP has carried out deadly attacks against the Pakistan Army who also tried to uproot the violent Pashtun national insurgency movement with violent force.

The recent suicide bombing by the ISIS-Khorasan at the Kabul airport raises legitimate questions regarding the involvement of Pakistan’s ISI. There are reasons to believe that the ISI might have used the H.N who in turn through its influence on the ISIS-Khorasan launched this deadly attack.

[1] Americans never understood Afghanistan like the Taliban did – Aug 23, 2021, Brookings 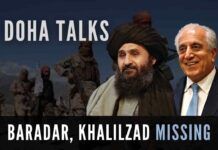 Are Farmers the new trade unions?

An incremental surrender of the awesome duo!