We at Chilkur are watching the developments in Tamil Nadu very closely and would like to request the Central government to intervene and protect the ancient belief systems of our religion. The traditional Archakas in various temples are being retired, removed, and in their place, non-customary persons are being appointed as Archakas in an ill-thought-out move which goes against the Supreme Court decision in this regard.

“We cannot let non-believers destroy the Hindu religion ‘deity, cannot in law consent to anything which may amount to an extinction of the deity itself’ – This is an important principle of law that the Supreme Court established and was reiterated in the Shri Padmanabha Swamy Temple case, Chilkur Priest stated[1].

Does Tamil Nadu Periyar reform have the consent of the deity?

Tamil Nadu government has claimed that its latest Temple reform removes thorns in the heart of Periyar. Does it create a thorn in the heart of the worshipped deity? It definitely does..!.

No deity will accept reforms in the worship system prescribed by it in Aagamas from an atheist! It is a basic common sense matter!

Tamil Nadu, A place that was the very cradle of devotion to Hindu deities with the maximum number of very great ancient temples is today the fountainhead of atheism much of which is due to the continuous efforts of Periyar and his followers to undermine Sanatana Dharma.

On the other hand, the 1936 Temple Entry Proclamation of Shri Padmanabha through his dasa has been recorded by the Government of India as an event that showed the way for the entire Bharat. But the credit of this great reform described as a miracle was suppressed and Hindu deities were pictured as villains. If the truth about the great reform done by the deity was not deliberately suppressed by communists and politicians, Periyar would not have had so much success in weaning away followers of Hindu deities and Sanatana Dharma into atheism.

The fact that followers of only Sanatana Dharma decreased while followers of Christianity and Islam increased due to the Periyar effect demonstrates the selective nature of the targeting of Hindu deities.

The Dravidian parties which owe their success in gaining political power to followers of Periyar had while in power facilitated the establishment of Periyar statues in close proximity of ancient temples with inscription in Tamil translated as:

The word “God” in the above inscription based on the above facts is clearly referring to Hindu deities. It is thus very clear by applying commonsense that Tamil Nadu Temple reform in the name of Periyar is a thorn in the heart of Hindu deities and can never have their consent.

Lots of organizations are writing to the President of India on the way the Tamil Nadu government is being unjust and unconstitutional.

We believe it is a violation of the principles of Dharma that Tamil Nadu State is being allowed by the Centre to implement Periyar reforms before the resolution of Article 363 Hindu Deity Rights dispute with strong legal opinion in support of Hindu deities.

Hindu Religious and Charitable Endowments Act is a matter which is in the concurrent list and the Centre is duty-bound by Constitutional morality inclusive of Raja Dharma to not allow implementation of Tamil Nadu Periyar reforms till such a time as the important dispute regarding the Deity Rights under Article 363 is resolved. 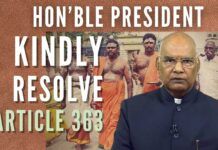 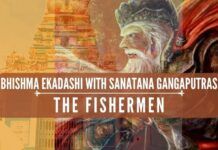 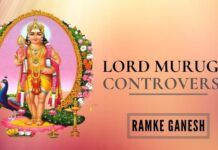 The Lord Muruga controversy blows up in the face of the Karuppar Koottam. Another conversion mafia attempt falls flat?

Time for BJP to realise that Shiv Sena is not an...