[dropcap color=”#008040″ boxed=”yes” boxed_radius=”8px” class=”” id=””]I[/dropcap]n the last few days, actor turned Bharatiya Janata Party (BJP) MP Hema Malini was being taken to the cleaners by the media, when clashes with a peculiar sect and police happened in her constituency of Mathura. Let us look at some facts:

Media played up the anger against the actress when she posted some photos in Social Media about her latest film shooting on the day the clashes happened. That she was in Mumbai and removed the posts of shooting as soon as she was aware about the incident was forgotten. When she rushed to the spot, she was not permitted by the state administration to enter the violent areas.

Why was the media not questioning the state administration run by Chief Minister Akhilesh Yadav? Why sensationalize it by maligning the MP who they fully knew had nothing to do with the incident? Chief Minister Yadav never reached the spot. In reality, there was no need of a Chief Minister to reach at the spot of a police operation. But media was putting blame on the local MP for not reaching the spot!

[dropcap color=”#008040″ boxed=”yes” boxed_radius=”8px” class=”” id=””]W[/dropcap]hy is the media not questioning the party that is in power in Uttar Pradesh?  Is it because of the largesse bestowed upon them by both the Bahujan Samaj Party (BSP) and  Samajwadi Party (SP), who have been alternating in power in Uttar Pradesh for the past two decades? Both allotted cheap land to most of the media houses with all sort of subsidies.

Many media owners and several senior editors allegedly also got cheap land from the UP government. Is this a reason for them to look the other way? In the past two days there has been two or three full page advertisements in most of the newspapers and now perhaps sensing a change in the wind direction, there has been a re-think on the reporting of clashes in Mathura.

What is the reason behind the clashes in Mathura? One person named as Ramvriksh Yadav, two years ago with around of his 5000 followers, got permission to stage protest for a few days in Mathura’s prime locality called Jawahar Bagh, having 280 acres. But the protestors claiming to be fans of Netaji Subhas Chanda Bose never left the area. They captured the 280 acres and were running a cult like activity. For the past two years, the state administration was keeping quiet and at last High Court ordered the state police to evict them. Media reports that Ramvriksh Yadav, originally from Ghazipur, had occupied the Jawahar Park in Mathura, and was running a parallel government, complete with administration, revenue and armed forces, within the park! The eviction caused the shoot outs and the police lost two officers. Spare a thought for the officers, who were slain in front of a strong police force, trying to contain a 3000 people mob. Around 29 people died in the violent clashes, including Ramvriskh Yadav.

Origin of the Cult

So what is the origin of this cult? It all started some 50 years ago with a mythical Baba called as Gumnami Baba. Gumnami Baba was  mentioned several times as Netaji Bose in hiding, but no one has established this as a fact. The then Congress government loved to propagate this myth as it was convenient.  A few decades ago Gumnami Baba’s disciple Jai Gurudev started a tussle with his mentor and he started claiming that he himself is Netaji Bose. Gumnami Baba expelled Jai Gurudev.

The expelled Jai Gurudev started his own cult and bagged enough land from the state government, then run by Congress. Former Prime Minister Indira Gandhi was also, allegedly, a visitor to his Ashram!!! When Jai Gurudev passed away, his disciples quarreled amongst each other and it split into different factions. The current violence creator Ramvriksh Yadav was one among such factions. All these factions have thousands of followers and it is interesting that media never tried to tell the truth about these deadly cult organizations.
Note:
1. Text in Blue points to additional data on the topic. 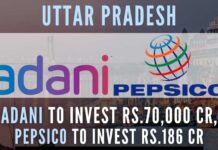 Subramanian Swamy urges for Amendments in the Places of Worship Act of 1991. Says the Act is against Fundamental Right of Freedom of Worship

Economic survey 2021-22 warns India needs to be wary of imported...