On Monday, Microsoft announced that a Federal Court had granted a request to allow the company to seize websites being used by a Chinese-based hacking group that was targeting organizations in the United States and 28 other nations.

Microsoft has now disrupted the activities of a China-based hacking group, gaining control of the malicious websites the group used to attack organizations and other countries around the world.

The Microsoft Digital Crimes Unit (DCU) said in a statement that a Federal Court in Virginia granted its request to seize websites of the hacking group, enabling the company to cut off Nickel’s access to its victims and prevent the websites from being used to execute attacks.

Obtaining control of the malicious websites and redirecting traffic from those sites to Microsoft’s secure servers will help the company protect existing and future victims while learning more about Nickel’s activities.

“Our disruption will not prevent Nickel from continuing other hacking activities, but we do believe we have removed a key piece of the infrastructure the group has been relying on for this latest wave of attacks,” Burt said late on Monday.

“We have also successfully blocked the registration of 600,000 sites to get ahead of criminal actors that planned to use them maliciously in the future,” the tech giant informed.

“However, we have not observed any new vulnerabilities in Microsoft products as part of these attacks. Microsoft has created unique signatures to detect and protect from known Nickel activity through our security products, like Microsoft 365 Defender,” the company noted.

Microsoft’s Threat Intelligence Center began tracking Nickel in 2016, with the group consistently using malware to intrude into company networks, conduct surveillance, and steal data. Vulnerabilities in Microsoft’s Exchange Server and SharePoint system were among those used to infiltrate companies, though Burt emphasized that there were “no new vulnerabilities” in Microsoft products discovered while investigating Nickel’s activities. 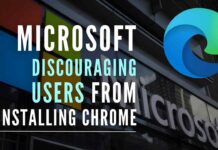 Microsoft is discouraging Windows 11 users from installing Chrome, Firefox browser and install its own Edge browser instead