I will write to the [Health] Ministry to consider making eye donation compulsory,” Alphons told TOI.

Kahlil Gibran’s prophet told the people of Orphalese, “Your children are not your children,” and enlightened them how children “are the sons and daughters of Life’s longing for itself.” Congress president Sonia Gandhi told the captains of Indian industry, “Your conscience is not your conscience,” and went on making corporate social responsibility funding mandatory. The Narendra Modi government revealed its attitude in the Supreme Court in the privacy case when it told citizens, “Your bodies are not your bodies.” Most of the time governments in India lie; in this case, however, it was speaking the truth. Tourism minister K.J. Alphons surely wants to act on the belief of his government.

So, on Tuesday, he proposed that the government make eye donations compulsory for all Indians. “Making a case for cornea donation to help those blinded by corneal diseases, Alphons said he would formally write to the Union Health Ministry to make eye donations compulsory for all persons after they die,” reported The Times Of India (October 11). “Despite awareness programmes, only 45,000 Indians donate their eyes annually. A simple corneal transplant has the power of saving people from blindness. I will write to the [Health] Ministry to consider making eye donation compulsory,” Alphons told TOI.

Even if the government passes a law to make eye donation compulsory, it would be unconstitutional.

Why is it that ‘compulsory,’ ‘mandatory,’ and ‘ban’ have become the keywords in this government’s parlance? Persuasion, freedom of belief, and voluntary action—not coercion, forced belief, and compulsion—are some of the defining features of a liberal democracy. Democracy is not just about voting once in a while but about the individual let believe, say, and do whatever he wants to believe, say, and do so long as he doesn’t end up harming others. If people can be influenced by awareness programmes about organ donation, or any other altruistic activity, it’s very good; but forcing them to donate their eyes or other organs is undemocratic and illiberal.

Ashok Agarwal, an advocate in Delhi High Court who has donated his body to AIIMS Delhi for clinical research purpose after his death, told the news Firstpost that the Minister’s wish, though well-intentioned, cannot be implemented due to constitutional reasons.

“The Constitution of India provides us complete right to our body under the Fundamental Right to Privacy. So, it is the individual concerned and none other can decide about his or her body,” he said. Therefore, even if the government passes a law to make eye donation compulsory, it would be unconstitutional, the lawyer said.

There are fewer organ transplants from deceased people in Muslim-majority countries, compared with the rest of the world.

Further, the death of a human being doesn’t mean the end of everything related him—his wishes, ideas, ideals, values, etc. For instance, Dev Anand (1923-2011), the evergreen Hindi film star known for good looks and flamboyance, didn’t want even his body to be shown to the public. Sadhana (1941-2015), the beautiful actress of yesteryears, suffered from thyroid problems and didn’t want to be photographed in her later years; she wanted people to remember her when she was at the peak of youth and fame. Shouldn’t the privacy of such people be respected?

Then there are religious issues. A large section of Muslims thinks that organ donation is against their faith. According to the Global Observatory on Donation and Transplantation, there are fewer organ transplants from deceased people in Muslim-majority countries, compared with the rest of the world. Which means that mandatory eye donation would unnecessarily infuriate the country’s largest minority community. Many Hindus, too, are not favourably disposed towards the idea of organ donation.

If awareness programmes in India are ineffective, efforts should be made to make them effective. Such efforts are on in the UK to convince Muslims to donate organs posthumously. What is needed in our country is persuasion, not compulsion.

Only “Uniform Civil Code” can save India 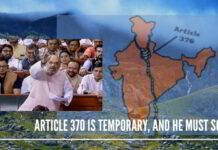 Article 370 is temporary, not permanent, Says Amit Shah. And he must scrap it 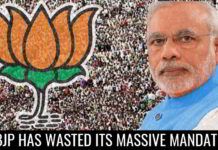 BJP has wasted its massive mandate