The mission of “one India, one flag and one law” is incomplete in the absence of Uniform Civil Code for all Indian citizens irrespective of their religion.

Uniform laws and uniform rights for every citizen are the pre-requisite of any nation, and of any secular democracy.

Article 44 of the Constitution of India stipulates that “The State shall endeavour to secure for the citizens a uniform civil code throughout the territory of India.”

Uniform Civil Code (hereafter also mentioned as UCC) would make India a really secular country. Though the Supreme Court vide its judgements have repeatedly suggested its enactment by the Parliament, and though Indian Constitution and its Article 44 came into effect in 1950, no government has cared to draft the UCC so far.

Pseudo-secularism has crippled India and has divided the nation into majority and minority.

Though the Indian Constitution’s Preamble proclaims India to be a SECULAR DEMOCRATIC REPUBLIC, India does not have the Uniform Civil Code. And this is despite the fact that India has the Uniform Criminal Code which is applicable to all religious communities.

As an exception, only Goa has got a common civil code. The Goa Civil Code also known as Goa Family Law was implemented by the Portuguese rulers when Goa was under Portugal. After Goa’s liberation and merger with India in 1961, Goa Civil Code was retained as desired by Goans.

In Western democratic countries, there is only one uniform law for all citizens regardless of their religion.

What is ‘Uniform Civil Code’?

The concept of ‘Uniform Civil Code’ is based on the timeless and universal principle of equality before the law.

Since the ‘Uniform Civil Code’ is a widely misunderstood notion, it is better to explain its meaning.

Thus, UCC means one law and one nation. No distinction between majority and minority community. Equal rights, and same laws for all in all civil matters. And discrimination against none.

UCC is not the same thing as the Hindu Civil Code as wrongly presumed by some persons. UCC is an all-embracing secular code. It is based on secular considerations.

Besides, Article 44 endorsing UCC is an important Directive Principle of State Policy. Therefore, the demand for implementation of UCC is not a Hindu or a communal demand. It is a secular demand.

All Western democracies have uniform civil codes. And no one calls them communal.

Logically in 1947, on India’s partition on religious basis and creation of Pakistan as demanded by Muslim League, truncated India should have been declared a Hindu republic. However, a bogus ‘secularism’ was foisted on truncated India where anything which is anti-Hindu, pro-minority and divisive is ‘secularism’.

Politics of pseudo-secularism practised in India is responsible for discarding UCC. Besides, though Article 15(1) of Indian Constitution prohibits discrimination on the basis of religion, Indian governments give special rights to minorities, and discriminate against Hindus.

Pseudo-secularism has crippled India and has divided the nation into majority and minority. Besides, it is responsible for the implementation of discriminatory laws and minority-appeasing policies by successive governments.

Honourable Mr. Justice Y.V. Chandrachud, the then Chief Justice of India had held, “A common civil code will help the cause of national integration by removing disparate loyalties to laws which have conflicting ideologies”.

Some examples of such discriminatory laws and policies are as follows:

1. Government is giving scholarships, free-ships, and many other incentives to minorities just on the basis of religion.

3. All prominent Hindu temples all over India are under government’s control. But no minority place of worship is controlled by government.

To escape the above-mentioned discrimination, some Hindu sects claim that they are not Hindu. In 2018, Lingayats in Karnataka claimed that they were a minority. And earlier, Ramakrishna Mission had wanted the minority status.

In a number of judgements, various Benches of Supreme Court have supported the cause of Uniform Civil Code; and have urged the Parliament to formulate it.

In 1985, in the Supreme Court’s judgement reported as Mohammad Ahmed Khan v. Shah Bano Begum (AIR 1985 SC 945), Honourable Mr. Justice Y.V. Chandrachud, the then Chief Justice of India had held, “A common civil code will help the cause of national integration by removing disparate loyalties to laws which have conflicting ideologies”.

Afterwards, in 1995, in its judgment reported as Sarla Mudgal v. Union of India (AIR 1995 SC 1531), the Supreme Court emphasised the importance of UCC and observed, “..there is no justification, whatsoever, to keep in abeyance, any more, the introduction of the ‘uniform civil code’ for all the citizens in the territory of India.”

“It is a matter of great regret that Article 44 of the Constitution has not been given effect to. Parliament is still to step in for framing a common civil code in the country. Common civil code will help the cause of national integration by removing the contradictions based on ideologies.”

In 2015, while hearing a petition, the Supreme Court Bench of Honourable Mr Justice Vikramjit Sen and Honourable Mr Justice Shiva Kirti Singh questioned the government on framing the Uniform Civil Code so that citizens of all religions are regulated by the same yardsticks in matters of law.

Unfortunately, Indian National Congress has all along supported the cause of pseudo-secularism and pro-minority politics. Therefore, it does not support the cause of UCC.

BJP has strongly supported the implementation of UCC. Its Election Manifesto of 2014 contained the following words:

“….. BJP reiterates its stand to draft a Uniform Civil Code, drawing upon the best traditions and harmonizing them with the modern times.”

On the contrary, when in 2016, Dr Satya Pal Singh of BJP presented his Bill Number 226 (in Lok Sabha) to treat Hindus at par with minorities in religious, educational and cultural rights matters without depriving minorities of their rights, BJP government did not pass this bill in Lok Sabha though it had majority in Lok Sabha. And the Bill lapsed.

Passage of this Bill would have helped the cause of UCC.

BJP’s Election Manifesto of 2019 re-affirms its commitment to implement UCC by repeating the exact words of its 2014 Manifesto.

No one can have any valid objection to UCC which ensures equal rights and same laws for every Indian citizen irrespective of his religion.

Equality before law and same laws and same rights for every citizen are the primary attributes of any secular nation. But politics of pseudo-secularism has ruined the social fabric of India.

Many of the problems faced by India are due to the government’s inaction on the Constitutional directive to implement UCC.

India must be liberated from the slavery of fake secularism. For survival of India as a nation, discriminatory laws and divisive policies must be replaced by UCC.

Since BJP government did nothing regarding UCC in its earlier tenure from 2014 to May 2019, nationalists must launch a strong and peaceful movement and request the present BJP government to fulfil its long-pending promise of UCC immediately.

No one can have any valid objection to UCC which ensures equal rights and same laws for every Indian citizen irrespective of his religion. Besides, there can be no objection from any community to UCC when there is no objection to Uniform Criminal Code which is common in criminal matters for all religious communities.

With all Indians being governed by the same laws and enjoying the same rights, UCC would transform India into a very strong, harmonious, egalitarian and united nation.

Besides, “JUSTICE”, “LIBERTY”, “EQUALITY”, AND “FRATERNITY” guaranteed to every Indian citizen as per Preamble of Indian Constitution can be delivered only through Uniform Civil Code. 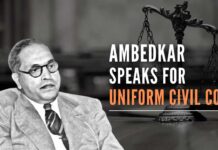 Knives out in BJP, Troika under fire