All undertakings depend upon finance. Hence foremost attention shall be paid to the treasury…. A king with depleted treasury will eat into the very vitality of both citizens and country people…. He shall protect agriculture from the molestation of oppressive fines, free labour, and taxes… Whoever doubles the revenue eats up the janapada.” (Kautilya, Arthashastra)

The present government has laid great emphasis on ‘minimum government’ and ‘maximum governance’. However, on the ground, this is yet to translate into reality.

In Kautilya’s opinion, all undertakings being dependent upon finance, treasury deserves foremost attention. Evidently, then, governments need to focus on enhancing tax revenues. On the other hand, Kautilya warns against excessively high tax rates as they would erode the very tax base. Drawing from Kautilya’s advice, widening the tax base, bettering efficiency of tax collections and controlling corruption while keeping tax rates moderate could serve as important guiding principles in the devising of a sustainable Indian tax model.

Preparing the budget of a country as huge and diverse as India is an unparalleled challenge. Each of us citizens has our own ideas about what the budget should be like. Every year, it is ritualistic almost for us to put forth our advice or wish list for the Finance Minister. One such wish list is as under.

Exemption and Savings
Perhaps the single most popular wish is that for enhancement of income tax exemption limit and for tax saving limit under Section 80C. Also, savings in the formal market must be incentivized in order to include the vast majority of households forming part of agricultural and allied activities, which at present form a negligible percentage. Small savings instruments, for example, should have a long term policy particularly considering farmers, labour, etc. do not have regular income and predictability can help them plan. The Jan Dhan Yojana has been a welcome step. However, for the scheme to be truly successful, time has come to move beyond mere opening of accounts. A large number of accounts lie dormant for which perhaps the prime reasons are infrastructure and trust based. Distance to banks is a huge impediment in most rural areas where people have to travel kilometers simply to get to the bank. Existing infrastructure of Village Panchayats or Post offices, etc. must be considered for efficient delivery. Bank Mitras or Business Correspondents (“BCs”) have no doubt helped achieve the record account openings. But, it is also a fact that most households simply do not trust the BCs principally because a large number of BCs absent themselves after opening of accounts. Exemption from service tax has been provided in order to incentivize BCs. Higher fees may be further considered. Better interest rates may be offered to the poor.

Most people find the existing service tax rate to be way too onerous. Reduction in service tax rate would provide a great impetus to the economy. Losses from such reduction may be recovered by alternative means such as taxation of rich farmers, marginally higher tax slab for those above a certain threshold of annual income, dividend tax in the hands of shareholders above a certain threshold, disinvestment of burdensome public corporations, etc.

Make in India and R&D

This is an opportune time, particularly with the slowdown in China, to take a lead by laying the foundation for the evolution of ‘Make in India’ ultimately to ‘Made in India’. Incentivizing research and development (“R&D”), tax exemptions / holidays, reduction in customs duty on import of sophisticated equipments necessary for R&D but not manufactured domestically, etc. would help fuel innovation in the country.

Although as per newspaper reports more than half of the funds allocated to the Ministry of AYUSH during the last Union Budget have been surrendered due to non-approval of projects, one hopes that funding is continued and fresh incentives provided to the Ministry, particularly to encourage R&D in Ayurveda. Aggressive defence against theft of traditional intellectual property and promotion and encouragement of R&D in Ayurveda can yet help India regain its rightful position and control of Ayurvedic proprietary knowledge and preclude importing of repackaged medicines, products and therapies that are essentially our own indigenous knowledge systems. To appreciate the extent of potential loss, one only needs to pay attention to the number of foreign patent bids on indigenous Indian drugs that have been thwarted. This number stood at 220 early this year.

The extremely ambitious targets set for the renewable energy sector must be supported by enhanced incentives and tax benefits. Accelerated depreciation for an extended term will go a long way in generating investor confidence. Solar parks should be extended the same treatment as Special Economic Zones and mechanism for access to competitive cost of capital should be devised.

Black Money, Digital Transactions and Minimum Government
The goal of financial inclusion and curbing of black money menace cannot be achieved without aggressive employment of digital tools and means. Only if the leaking tap of corruption is closed the collection of taxes will be meaningful. This is a continuous battle and needs constant attention and effective measures. Digital transactions will not only help cut costs, which in itself is a huge incentive to banks forming part of financial inclusion activities such as the Jan Dhan Yojana, but will also help create a digital trail that will make dubious cash transactions less easy. Incentivizing and simultaneously promoting digital literacy, particularly in the rural populace, will greatly help transition to a cashless economy, even if that is still not achievable anytime in the foreseeable future.

So far, the government has been talking only of black money stashed abroad. Steps must be taken to address black money lying within the country which is far more easily recoverable than that lying outside the country.

The present government has laid great emphasis on ‘minimum government’ and ‘maximum governance’. However, on the ground, this is yet to translate into reality. All government departments must more actively identify archaic laws and these need to be done away with sooner than later.

“Just as fruits are gathered from a garden as often as they become ripe, so revenue shall be collected as often as it becomes ripe. Collection of revenue or of fruits, when unripe, shall never be carried on, lest their source may be injured, causing immense trouble.” The takeaway from Kautilya’s advice in Arthashastra is that revenue collection is an art that requires walking the thin line between obtaining the largest revenue for the state and leaving the taxpayer unburdened. That, of course, is easier said than done! 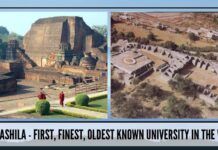 Takshashila – the first, finest, and oldest known university in the world