Producing the copy of forensic audit report on financial transactions of Tata Group, BJP leader Subramanian Swamy has petitioned to CBI on Friday to conduct probe on the ‘hawala transactions’ and payments to terror linked persons in Air Asia related business operations. The forensic audit report clearly said the money were flown to an entity linked with a Dubai resident Hamid Reza Malakotipour, whom the US Government has classified as ‘A Specially Designated Global Terrorist’ for his suspected terrorist activities.

“Recently I have had the opportunity to get a synopsis of the Forensic Audit Report carried out by Deloitte and on money flow emanating on the authority of Ratan Tata. I am enclosing a photocopy of the relevant two pages for your perusal.

“According to this, the Tata Sons under the leadership of Ratan Tata had engaged in corrupt hawala routed action with a Dubai based resident Hamid Reza Malakotipour, whom the US Government has classified as ‘A Specially Designated Global Terrorist’ for his suspected terrorist activities,” said Swamy in a letter to Rakesh Asthana, the acting CBI Director.

Swamy letter with the two pages of the sensitive forensic audit report is published at the end of this report. The confidential report says in connection with Air Asia operations, money from Tata Group companies were flown to a company called HNR Trading PTE Ltd, where one Rajendra Dubey holds 99.9% stake.

“Review of Dubey’s directorships revealed that he was Director and Shareholder in an entity called Green IT Com Private Limited registered on 23 May 2011 along with an individual by the name Hamid Reza Malakotipour. Hamid, a Dubai resident, has been identified by the US Department of Treasury as a ‘Specially Designated Global Terrorist’ for suspected terrorist activities. He was alleged of supplying equipment to the Islamic Revolutionary Guard Corps (IRGC) – Quds Force, an Iran based special operation force designated as a supporter of terrorism since 2007 by the United States.

The findings of the Forensic Audit Report expose the tall claims of integrity by Ratan Tata.

“As per a press release published by the United States Department of the Treasury dated 06 February 2014, Hamid was listed as one of the ‘Treasury Targets Networks Linked to Iran’ for his alleged terrorist-related activity. Hamid had served as the regional manager of Mahan Air in the UAE and also was the managing director of Sirjanco Trading LLC and BSA FZE and he is alleged to have supplied equipment to IRGC during his stints with one of these companies. These findings are based on searches of public records and subscribed databases,” said the Deloitte’s Forensic Audit Report on Tata Group’s financial bungling. The Report was prepared as per the directions of Cyrus Mistry, the ousted Chairman of Tata Sons. The audit report which believed to be more than 400 pages has found several financial irregularities in the Tata Group and this preparation of the report was the prime point of a tussle between Ratan Tata and Mystry.

Here’s a copy of the letter of Dr. Swamy to the Director of CBI with details of Deloitte’s findings:

Correction: The title has been corrected to indicate the possible direction of money flow. 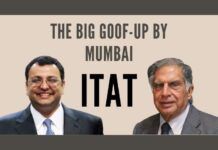 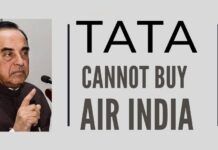 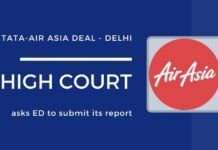