The government has built 62.38 lakh toilets in 2015-16 as part of Swachh Bharat Mission (Gramin), parliament was informed on Wednesday.

“In respect of Swachh Bharat Mission (Gramin) against expected outcome of 50 lakh for individual household latrines for the year 2014-15, 58,54,987 latrines were constructed, which is an achievement of 117 percent of the expected outcome.

[dropcap color=”#008040″ boxed=”yes” boxed_radius=”8px” class=”” id=””]O[/dropcap]”f these, 49.49 lakh household latrines were constructed after the launch of Swachh Bharat Mission (Gramin), indicating more than 446 percent increase in construction of toilets after the launch of SBM (G) as compared to pre-SBM period of 2014-15. During 2015-16, 62.38 lakh toilets have already been constructed as on November 30, 2015,” Minister of State for Drinking Water and Sanitation Ram Kripal Yadav told the Lok Sabha.

The government has a target of building 1.04 crore individual household toilets by October 2, 2019. 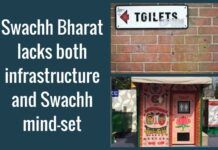