Before I start, I should preface this article with this statement: As a common person (and boy, am I common!), I will become a judge and pass judgment! After all, the Supreme Court is filled with non-prejudiced people just like me!!

Back in November 1969, a 21-year-old walked out to the center of Green Park in Kanpur. It was a cricket match (Test Match) between Australia and India. I was a child who had never seen or played cricket. However, my parents decided I should go watch this event. Anyways, the 21-year-old was out quickly. He walked back to the pavilion without disturbing the scorers, followed by boos. The second time around, when he walked out, he was greeted with boos! After all, he had scored a big fat ZERO in the first inning. In the next few hours, G R Viswanath (Vishy) showed why M A K Pataudi had selected him.

In an inning that was laced with 25 boundaries, he scored 137 runs to become just the 6th Indian to score a century on debut. In the next 14 years, he scored 13 more such centuries; on the way, he broke the myth that an Indian centurion on debut would never succeed in scoring a century again. He was decorated with the Arjuna award. He had to wait 4 years for his second century (113 against England).

Over the next 10 years, he scored 12 more centuries. He played for 14 years and scored 14 centuries, scoring 6080 runs at an average of around 42. He doesn’t deserve any Padma awards; even though he played only 91 tests, as compared to Dilip Vengsarkar who played 116 tests and scored 17 centuries at an average about the same as Vishy. However, Dilip was decorated with the Padma award; and rightly so, since he was not non-political as opposed to Vishy. Who does Vishy think he is? What does sportsmanship have to do with cricket? Does he deserve a Padma award? An Emphatic NO!! He scored fewer runs than Ganguly; so what if Saurav played more than Vishy? Saurav played the game as a fighting champion while Vishy played a quiet game, thinking of the team! The team? Who cares about the team when one is supposed to be selfish and think about oneself? This sportsmanship is grossly overrated and doesn’t deserve to be repeatedly mentioned.

My judgment: NO TO PADMA AWARD FOR VISHY!

The people of India don’t understand the logic in keeping two types of the legal system; one for the majority of the people and another for the 21% (and growing) minority. It is important that the 21% (and growing) minority be kept happy as the results, of UCC implementation, would be disastrous! Who wants to see India burning (literally) due to some stupid legality? So what if the army, the reserved forces, and paramilitary forces could easily handle such eventualities?

Additionally, the complexities involved in such a unification of laws would leave the overworked Supreme Court absolutely exhausted. They wouldn’t have any free time to pass judgment on any of the critical issues such as, should the temples have the right to decorate the various deities with flowers; no time to go out in the afternoons and play a round of golf at the Delhi Golf Links! How could people be so heartless??

My judgment: NO TO UCC

Freeing the temples from the clutches of the government

First of all, the temples are NOT in the clutches of any government. They voluntarily asked for government involvement as they wanted to be ruled by state and Central governments! That being stated, it is important to understand that temples are, per the astute poverty-ridden statesman D K Shivakumar, funding many social programs.

The temples are, and will always be, administered by the government. The 21% (and growing) minority deserve to go visit their sacred places Mecca and Medina. So what if they are radicalized and murder the majority population? This is just their way of controlling the growing Indian population! So what if the majority population is staying at 76% (or under) while the, yep you read my mind, 21% (and growing) minority is, well, growing by the hundreds every minute?

My judgment: NO TO FREEING TEMPLES

Why? What did these holy places do to the Hindus? To deprive thousands of minorities of daily living by not visiting these sacred places and buying the chadars (blankets) to place on the tombs of deceased religious figures. Just because some, per the Congress great RaGa,” silly youngsters did some silly things”! To take such disastrous decisions is inhuman and shows communalism! This has to be stopped.

You did say that your vision is to see every member of the 21% (and growing) minority with a laptop in one hand and their holy book in the other! So what if the laptop had plans to FLYING AIRCRAFTS INTO THE WTC!! Not all members of this GROWING MINORITY are planning to blow up public places. Not all minority people are terrorists! Yeah, yeah, yeah, I have heard the argument that “Not all minorities are terrorists but all terrorists are from that minority”! But that’s ridiculous! There are so many of them that are valuable, secular-minded people who don’t want to blow up buildings! Again, yeah I have heard the argument that “do you see any country where they are in majority and are secular?” Maybe not, but you do have to give them a chance to be the first community to be secular!!

My Judgment: AN EMPHATIC NO TO BOYCOTTING ANY DARGAH 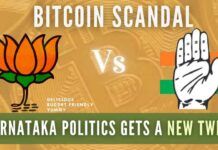 Karnataka politics gets a new twist in the Bitcoin scandal