On Saturday evening the Uttar Pradesh Police foiled the plot of spreading communal unrest amid the ongoing Kanwar Yatra. The police arrested Kamal & Adil who tried to hatch a communal conspiracy near the ‘Jalal Shah Mazar’ in Bijnor.

Both the conspirators are brothers who tried to ransack Jalal Shah Mazar & burning ‘chadar’.

Kumar added, “Police arrested 2 brothers in this regard, namely Kamal & Adil. They tied a saffron-coloured cloth on their heads & conducted the incident. No damage was done to religious texts. The same incident happened at Qutub Shah Mazar in Sherkot at 11:30 am, which went unnoticed.”

Police officials said that special officers have already been deployed on Kanwar Yatra routes and helicopters for aerial vigilance. The police officials said that Chief Minister Yogi Adityanath had issued directions to ensure the safety and security of all pilgrims during this auspicious ‘Sawan’ month and all possible facilities had been provided for them. 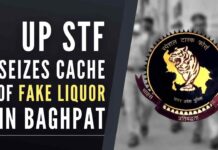