Files declassified by the Narendra Modi government reveal that serious objections were raised about Emilie Schenkl being acknowledged as Netaji’s wife and Anita Bose Pfaff as his daughter.

According to one document, the home ministry, on February 6, 1980, wrote to the Prime Minister’s Office (PMO), the external affairs ministry and the Research and Analysis Wing saying it had “no records of Netaji’s marriage” or “birth of a female child”.

“The ministry (has) no records pertaining to Netaji’s reported marriage to a foreign lady or birth of a female child by that marriage. Intelligence bureau has also been consulted, and they have no record in this regard,” reads the letter signed by Vinay Vasistha, under secretary in the government.

The move from the home ministry came after then West Bengal Governor T.N. Singh enquired about the identity of Anita Pfaff whom he met at the Raj Bhavan.

Singh made the enquiry following a letter by Arun Ghose, a member of the All India Freedom Fighters’ Samity, raising serious doubts about Netaji’s marriage.

A cursory glance of the file reveals the following:

– It had been acknowledged that Emilie Schenkl was the widow of Subhas Chandra Bose and Anita Schenkl his daughter.

– The family members of Subhas Chandra Bose had also accepted this.

– Anita Bose visited India in 1960 and was staying in the prime minister’s house for some time.

– All India Congress Committee has been sending Rs.6,000 annually to Anita upto 1964, reads the PMO document.

The PMO’s reply was made after Justice G.D. Khosla, who headed the enquiry commission to probe the disappearance of Netaji, sought to examine the panel’s report after he was sued for defamation on his claims in his book that Anita was Netaji’s daughter.

In another letter dated November 1963, bearing his stamped signature, then prime minister Jawaharlal Nehru said he was aware that Netaji had married.

“I had this knowledge that either in Germany or Austria he had married and had a daughter who two-three years back visited India and met Subhas Babu’s family in Kolkata,” reads the letter in Hindi.

There is another document wherein one Hari Pada Bose in March 1962 had written to Nehru enquiring if there existed any official record of Emilie Schenkl’s marriage to Netaji and the birth certificate of his daughter.

In the memorandum attached to the letter bearing the sign of prime minister’s private secretary M.L. Bazaz, it has been stated that Hari Pada Bose’s letter was “not acknowledged”. 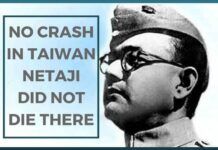