Mr. Modi! Wake up and smell the coffee!!! If this is how companies are going to be treated in India, then you might as well advertise to the world, “Don’t come to India! I did not mean a word of what I said when I invited the world to Make in India. Startup India does not suggest a thing since my courts have deemed that the Corporate veil can be broken at will”. I hope this is not what you are saying to the world. If I look at the happenings in the corporate world in the past few weeks, this is the message I am hearing…

This barbaric move to deny FTIL of its operational accounts for conducting day-to-day business is an attempt to cut off oxygen to Shah and must be called for what it is – a witch hunt.

First, the shocking move by the Economic Offense Wing (EOW) of Mumbai Police[1] to attach the operational accounts of 63 Moons Technologies (formerly known as FTIL) reminds one of a similar move made by the Securities Exchange Board of India (SEBI). SEBI accused 13 current and former executives of FTIL and MCX of alleged insider trading. Froze their bank accounts, which had to be undone after appealing to the Securities Appellate Tribunal (SAT). Now the move to freeze the operational accounts of 63 Moons. Is this being done to try and deny FTIL the required finances to fight their case in the Supreme Court?

Second, the judgment handed down by the Bombay High Court in the Writ Petition of 63 Moons Technologies Ltd. (formerly Financial Technologies (India) Ltd.) vs The Union of India was another bombshell. For the first time, in the corporate history of India, two private concerns were being asked to merge under Section 396 of Companies Act, 1956. Until now, this was used to merge government companies with their consent[2].

Did the bench consider the implications of such a move, which was effectively a piercing of the Corporate veil of companies and essentially throwing the concept of Limited Liability out the window? Would this not scare away the already skeptical Foreign Institutional Investor (FII) and the Foreign Direct Investor (FDI) especially when it comes to investing in parent companies with subsidiaries? It has been proven the world over that the spirit of entrepreneurship is essential to create a vibrant economy. With a stroke of the pen, the High Court has sent shivers up and down the spine of the Venture Capital community.

Is there more going on in this crisis than meets the eye? Is 63 Moons and by implication Jignesh Shah being singled out for punishment? If so, for what reason? Is Chidambaram calling in favors from his minions to ensure that FTIL is finished?

What is the NSEL crisis?

Let us go over some facts, as shown in Figure 1. This is a broad timeline of events that transpired at the National Spot Exchange Limited (NSEL).

There are three Commodity Spot Exchanges that are functioning in India – The NSEL, the NCDEX Spot Exchange and Indian Bullion Stock Exchange Limited[3]. The Forward Markets Commission (FMC), the then commodity markets regulator, misrepresented facts to the Ministry of Consumer Affairs (MoCA) by alleging that NSEL was violating certain terms and conditions pertaining to an exemption granted to it under section 27A of Forward Contracts Regulation Act (FCRA). Though the exemption was general in nature, the FMC recommended to the MoCA following which it issued a show cause notice to NSEL on April 27, 2012.

NSEL promptly replied to the show cause notice and MoCA went quiet. There were no follow up questions, not a peep. But on July 12, 2013, it issued a letter to the NSEL asking it to stop issuing any future contracts and to settle existing ones by July 31, 2013.

The FMC created the crisis and took no action against the defaulters or to resolve the crisis despite having all the powers. It acted only against NSEL, FTIL and Jignesh Shah, initiating all actions against the FTIL Group on the instructions of Chidambaram which were executed through K P Krishnan and Ramesh Abhishek, the then FMC Chairman. The regulator became the Destroyer.

As the majority of actions by the regulators and other government agencies were concentrated only against NSEL, FTIL and Jignesh Shah, the defaulters swindled the goods from the warehouses, hypothecated certain stocks to banks and in some cases they reported partial stocks in connivance with Anjani Sinha, the then MD & CEO of NSEL.

However, the defaulters received full money and once the Exchange stopped functioning, they not only dishonored their contract to purchase back the goods but also did not deliver the stocks.

Who is trying to recover from the defaulters?

All the recovery work done till now has been by NSEL and NSEL alone. As Figure 2 shows, about 8% of the money has been recovered thus far from the 24 defaulters as of Nov 2017[4]. Since the EOW and ED have already attached the assets of the defaulters, what is the need for freezing the FTIL operational accounts? Just on the basis of the Bombay High Court judgment?

This barbaric move to deny FTIL of its operational accounts for conducting day-to-day business is an attempt to cut off oxygen to Shah and must be called for what it is – a witch hunt. On a day when the Finance Minister is fighting for his life, this short-sighted move by the EOW is only going to make matters worse – a lot worse. It is high time the Prime Minister stepped in to ensure that justice is done. Mr. Modi, are you listening? 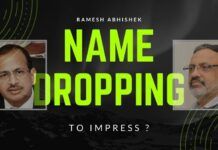 Swamy slams SEBI Chairman for not acting on complaints of insider...