A substantial part of the prestigious contract for national memorial for Sardar Patel, has been outsourced by L & T to a company in China

Sub: Statue of Sardar Patel and L & T’s role in it

At the outset, I would like to state that I am the huge fan of yours. From extremely humble beginnings at L & T you have not only risen up the ladder but also provided dynamic leadership to the Group and brought it to the level that it is today. Your long association with L & T has only witnessed the group gaining from strength to formidable strength.

In your address to the annual general meeting held on August 22, 2017, you made very emotional and patriotic references which moved me as a fellow patriot. You stated “Think of the names that strike a patriotic chord – Akash, Prithvi, Agni, BhahMos, Rohini, SLV – 3, ASLV, PSLV, Chandrayan, Mangalyaan, Mumbai High….the roll call of national triumphs is long and your company was part of them all.” You said the company has “provided technological impetus and manufacturing muscle for virtually every venture in nuclear power, space research, defense, hydrocarbon…”

You also said your father, who was a teacher and freedom-fighter, was your role model. “As an engineer, I felt I could best continue that family tradition by building products and projects that would help my country stand tall,” you observed.

It is learnt that the entire brass cladding comprising of 25,000 parts is being fabricated in China!!

Given this strong patriotic background, I was surprised nay shocked when I came to know that your company, which has bagged the prestigious contract for building a national memorial for Sardar Patel, has outsourced a fairly substantial part of the contract to a company in China!! It is learned that the entire brass cladding comprising of 25,000 parts is being fabricated in China!!

It is not only ironical, but downright insulting to the memory of the Iron Man, who is a symbol of national unity and integrity, that China, a country which invaded us in 1962 and more recently sought to humiliate us on the Doklam issue, will have a role in constructing the statue which is billed to be the tallest in the world. Do we lack the technology for brass cladding in India? Maybe commercial considerations weighed with your company’s decision to seek a Chinese partner for this mega project. But, then this is one project where commercial considerations ought not to have had any role. Our national self-respect is at stake. Your company’s decision to involve China is like rubbing salt into the wounds of lakhs of Indians, including your father, who sacrificed their everything for our freedom. Your company’s decision is an insult to the hundreds of Indian soldiers who laid down their lives while defending our motherland against Chinese invasion. In any case, it is a matter of national pride. Do you think China would have outsourced even a part of the work of building a statue of Mao Zedong to a foreign company? No way.

Please make sure that the statue is 100 % Indian in every respect.

Sir, I humbly appeal to you to forthwith renege the contract which your company has awarded to the Chinese firm. The loss incurred by L & T can be made through public contributions to your company. Please make sure that the statue is 100 % Indian in every respect.

I am appealing to your strong sense of patriotism.

Looking forward to a prompt and favorable response 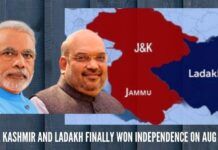 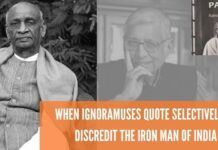 When ignoramuses quote selectively to discredit the Iron Man of India Neutralising the enemies within, in Kashmir and elsewhere