[dropcap color=”#008040″ boxed=”yes” boxed_radius=”8px” class=”” id=””]I[/dropcap]n mid-2017 three countries, Saudi Arabia, the United Arab Emirates and Bahrain led the way to cut off ties with Qatar, another small Gulf country.  The number of Qatari opponents grew to eight and were increasing: the Maldives, Mauritius, Libya’s eastern Government, Yemen’s internationally recognised government, Jordan, Morocco, Egypt and Sudan imposed, in varying degrees, sanctions on Qatar.  It was tragic that the Islamic world already had a deep historic rift between Sunni and Shia countries.  But now there was a fracture within the Sunni sphere which might have serious consequences if it isn’t patched up.  What caused this rift and what, if it persists, are the consequences?  Why is Qatar singled out when it is alleged universally that the main enemy is the Islamic State of Iraq and Syria (ISIS/ISIL/Daesh).1

The main argument against Qatar is that it is promoting and supporting terrorism.2    Qatar allegedly supports the Muslim Brotherhood, Daesh, Afghan Taliban and Yemeni Houthis.3    The editor of arabnews.com Faisal J. Abbas classifies Qatari statements as lies: “There are lies damned lies and Qatari statements.”  The Saudi-UAE-Bahrain-Egypt terror list includes 59 individuals who support terrorists, of whom 18 are Qatari and 5 out of 12 entities are Qataris.  Since the Muslim Brotherhood is very active in Egypt, 25 out of 59 individuals, the most, are Egyptians.4        Qatar is supposed to synchronize its policies with those of other signatories of the Riyadh Agreement of December 2013 and the Comprehensive Agreement of 2014.  Kuwait’s leader witnessed these agreements by Saudi King Abdallah bin Abdul Aziz al-Saud and Qatar’s ruler Sheikh Tamin bin hamad al-Thani.5 By forging an independent policy, Qatar is allegedly in breach of these two Agreements.

Qatar could either choose to live in isolation or change its policies. Saudi Arabia was not interested in regime change.  On June 5, 2017, Saudi Arabia and its allies cut diplomatic ties, and commercial and transport links with Qatar.6    They demanded that Qatar close Aljazeera network since it was propagating ideas that destabilized other nations.7  In view of Iran’s push towards Lebanon through Iraq and Syria, the Saudi team also want Qatar to downgrade its contacts with Iran.  This demand is backed by US and Israel.

[dropcap color=”#008040″ boxed=”yes” boxed_radius=”8px” class=”” id=””]I[/dropcap]t appears that the Saudi Arabia camp misread Qatar’s policies.  The blockade sent Qatar more solidly into Iran’s embrace.  Qatar is attached to the Arabian peninsula and normally gets most of its produce from Saudi Arabia.  With the blockade in place, Iran supplied Qatar’s needs within 12 hours.  A humorist consequently showed a current Qatar being attached to the Iranian mainland on a map.  Besides, Qatar and Iran share the largest underwater gas field so that it is natural that Qatar should be a close ally of Iran.  Moreover, Iran is a regional power and Qatar cannot afford to be on Iran’s wrong side.  Kuwait and Oman too share friendly relations with Iran on similar grounds but do not have the finances that Qatar has to forge an independent foreign policy; consequently, they usually act as mediators between the two regional Sunni powers.  At a per capita GDP of $138,480, Qatar’s is one of the highest in the world compared with Saudi’s $21,313 (2015).  Qatar also has a national fund, like Norway, at about $300 billion.  Qatar can, therefore, survive isolation with little discomfort 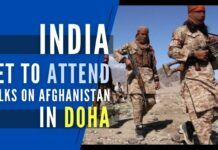