The top brass of the National Conference (NC) and the Peoples Democratic Party (PDP), two main constituents of the newly founded People’s Alliance for Gupkar Declaration (PAGD), have finally made up their mind to strengthen the hands of Prime Minister Narendra Modi at the grassroots level by participating in the District Development Council (DDC) polls scheduled to take place in eight phases from November 28 in Jammu and Kashmir.

After the Abrogation of Article 370 and 35A, it is for the first time elections have been announced in the Union Territory of Jammu and Kashmir. West Pakistani Refugees who were earlier barred from participating in the polls are also set to exercise their right to franchise for the first time.

The DDC polls are being held in 20 districts for the first time. Each district has 14 constituencies. Thus, 280 constituencies, 140 each in Jammu and Kashmir divisions will go to polls.

PAGD spokesman Sajad Gani Lone told reporters, “The PAGD will contest the elections as a single entity. He said, “This space is too sacred to be left for the invaders to invade.

No problem in Kashmir

Even before the restoration of Statehood/flag/ Article 370,35A in Jammu and Kashmir all the political parties have announced their decision to throw their hats in the poll arena.

The landmark political decision arrived at the maiden meeting of the People’s Alliance for Gupkar Declaration at the residence of Dr. Farooq Abdullah in Jammu on Saturday.

The decision to participate in the polls assumes added significance in the light of provocative statements made by PDP Chief Mehbooba Mufti claiming members of her party would not raise the Indian tricolor unless they are allowed to raise the flag of Jammu & Kashmir.

Between October 24 and November 7, the day the decision was taken to participate in the DDC polls, no major political development took place which triggered a sudden change of heart of PDP Chief.

Congress party, which initially attended the meeting of Peoples Alliance for Gupkar Declaration has separately announced its decision to participate in the upcoming polls.

It would be difficult for workers and cadres of these political parties to work together as “it will lead to many rebels contesting elections against alliance candidates.

Though the Congress party maintained a safe distance and skipped the recent meetings of PAGD, on Sunday Dr. Farooq Abdullah, Chairman of the PAGD once again created a flutter by claiming that the Congress party is still with us and we will fight the DDC polls together.

“Where have they separated? There should be no misconception. Congress is part of the alliance and we are fighting the (DDC) elections together,” the National Conference leader said.

When his attention was drawn to Mir’s statement on Saturday that his party is fighting the DDC elections and putting up candidates, the former chief minister quipped, “When you heard this…yesterday was different and today Mir sahib came to meet me and said we are fighting the elections together.” Interestingly, Chief spokesperson of Congress Ravinder Sharma, said GA Mir made a courtesy call to Abdullah and “there is no official statement on the meeting”.

Sharing details of the meeting, PAGD spokesman Sajad Gani Lone told reporters, “The PAGD will contest the elections as a single entity. He said, “This space is too sacred to be left for the invaders to invade. This is the most sacred space in democracy and we will not allow it to be marauded or molested by invaders. We will keep it for the future generations so we are all going to fight it together,” Lone said.

He added that the PAGD will go through the modalities and Dr. Farooq Abdullah would release every single name of the candidates from his own hands.

During the meeting, the PAGD leaders also observed that they are part of the democratic process since the start of their political career and, therefore, they collectively and unanimously decided to field candidates for the elections.

On Sunday, party Vice President Omar Abdullah made yet another important announcement that the Alliance leadership was ready to meet the BJP. “We are ready to meet even the BJP notwithstanding the fact the party was not acceding to our demand on the restoration of Article 370”, Omar told reporters in the Kalakote area on Sunday.

Reacting to the announcement of PAGD spokesman over participation in the DDC polls J&K, BJP on Sunday said the democratic exercise would expose the fault lines of the “artificially created” alliance.

“The upcoming DDC elections will expose the fault lines of the artificially created alliance as their cadre had always been fighting against each other and that had been their reason to exist politically,” BJP chief spokesperson Sunil Sethi said in a statement here on Sunday. He further said it would be difficult for workers and cadres of these political parties to work together as “it will lead to many rebels contesting elections against alliance candidates.”

Sethi said the decision of PAGD, an amalgam of seven political parties including the National Conference and PDP, to contest the DDC polls was a forgone conclusion given the “power greed of Kashmir-based political parties.”

“That prompted the government to take decisions for party-based elections of DDC. Kashmir-based political parties have no principles or ideology but to grab power and that has been their single motive all along,” he claimed.

He said the participation of political parties is good for democracy but people of Jammu & Kashmir are now put to greater responsibility of electorally rejecting “these Pakistani and Chinese stooges” whose statements are deliberately given to be used by “enemies of India” sitting across borders.

“It has been proved time and again that these so-called political leaders do not hesitate in making statements against the national interest and public order just for political mileage,” he alleged. 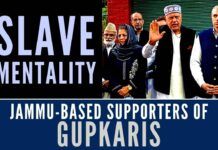