Another motion poster of ‘The Kashmir Files’ released

The makers of the highly-anticipated movie ‘The Kashmir Files’ have revealed another gripping motion poster of National award-winning actor Pallavi Joshi from the exodus drama. Earlier they had launched the motion posters of Anupam Kher and Mithun Chakraborty.

The film will be released theatrically worldwide on 26 January 2022, coinciding with India’s Republic Day.

Pallavi Joshi will be seen essaying the role of Professor Radhika Menon. Pallavi’s character motivates her students to fight for Azad Kashmir and has very deep political connections. Krishna Pandit, played by Darshan Kumaar, is her trophy for the Azad narrative, and she uses the best of her tactics to mold him.

In the motion poster, the character is controversially heard saying, “Kashmir has never been an integral part of India and this is a historical fact. Agar India Britain se apni Independence ke liye lad sakti hai toh Kashmir kyun nahi?”

Vivek Agnihotri’s ‘The Tashkent Files’ went on to win the prestigious National Award beginning this year, Zee Studios and writer-director Vivek Ranjan Agnihotri have collaborated again to bring forth the unfortunate exodus that the Kashmiri Hindus had to face.

‘The Kashmir Files’ is based on a true story of the genocide of the Kashmiri Hindus residing in Kashmir. It portrays their pain, suffering, struggle, and trauma and presents eye-opening facts about democracy, religion, politics, and humanity. The research for the film has been done based on video interviews of the first-generation victims, who had to leave the state in a mass exodus. 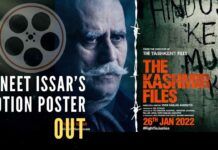 Kangana’s Thalaivi performance is the reason she is all over the...