In the first conviction under the Love Jihad law in Uttar Pradesh, a Kanpur youth was sentenced to 10 years in jail and a fine of Rs.30,000 for hiding his religious identity from the girl.

Out of the fine amount, Rs.20,000 will be given to the victim as compensation.

The youth named Javed introduced himself to the minor as Munna and promised to marry her, following which the couple eloped. The Muslim youth is a resident of Kuchi Basti, living in the Juhi police station area, took the victim away with him by implicating himself in a false love trap by pretending to be a Hindu.

The girl reportedly told the police that when she reached her husband’s house, he revealed his identity and asked her for a ‘Nikah’ to which she refused. She also accused the youth of raping her.

The victim’s mother filed a complaint. A case of rape including the POCSO Act was registered and the accused was sent to jail. In the statement, the victim told that the accused Javed had befriended her by calling herself a Hindu name Munna. After this, on the pretext of marriage, he took them along.

ADGC Ajay Prakash Singh and Special Public Prosecutor Chandrakant Sharma said, “The accused was arrested by the police on the second day of the registration of the report in the Love Jihad case.”

Hearing in this case, the Additional District Judge has given the verdict against the accused. 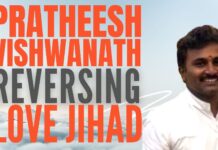