Parrikar, a former Goa chief minister, was speaking at a function organised by the union ministry of road transport, national highways and shipping that launched road infrastructure projects worth Rs.3,500 crore on Friday.

“Let us be positive this new year…The Rs.3,500 projects which we have got because of Nitin ji (Nitin Gadkari), let us be positive. These projects will be completed in two-and-a-half to three years,” Parrikar said.

Work will start in three to four months. Let’s complete these projects positively and resolve on New Year that we should look at things positively and publish positive news, he added.

The defence minister also spoke about how constant litigation and criticism of necessary infrastructure projects resulted in delay of such efforts and that the critics got encouraged after their alleged nit-picking was backed by media coverage.

“These people need to be identified, paper walas should pay attention. I observe these things closely if there is a small negative thing, the news is big. Such people get encouragement. They should not be given encouragement,” Parrikar said.

The minister also said the pace of armed forces road building projects had picked up under Prime Minister Narendra Modi-led government at the Centre.

“So many road projects of the armed forces were stuck for NOCs from Environment (ministries). The Modi government has cleared 100 out of 200 projects. Some more will be cleared and some will be dropped because there are some genuine obstacles,” Parrikar said. In Conversation with Aditya Satsangi, Author of the book ‘Debunking Mythology: Sattology’ 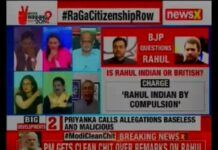 MHA query for Rahul Gandhi – Too little too late?