In previous part of this article the Swamiji explains, why whatever Rama does is Dharma. In this part, the Swamiji further explains the two incidents from the Ramayana which many people find hard to accept.

Now, coming to the subject of dharma for kings, a raja or king is one who uses informers as his eyes and ears. He does not depend on his physical eyes and ears. Chanakya has made it very clear that a king is bound to rule his kingdom based on the inputs given by his various informers who move around the kingdom concealed or otherwise. These informers collect information about the state of his kingdom and relay to the king. Based on these inputs, the king is bound to adjust his ruling style.

During the time of yajnas, he used to have a golden murti of Sita made, to be seated next to him since yajnas require the husband and wife to be together for its conduct.

So, coming back to the story of Rama, his informer comes back to him with the following observation. He says that he overheard a conversation in Rama’s kingdom which went like this: “See, if you have gone and stayed with someone else just like that, you can’t expect that I will take you back. I am not Rama to do that”.

A king should not do wrong nor be accused of doing wrong. That was the law. The ethics and values of that time were not the same as those today where our politicians hang on to power and position no matter what wrongs they indulge in.

The ethics and laws of those days were that it didn’t matter if someone from other kingdom or enemy kingdoms talked ill of the king. However, even if one person from one’s own kingdom accused the king of any wrongdoing, the king was bound to take note and make corrections.

Now, in Rama’s case, after he had gotten this information from his informers, he had two options before him. He could choose to take his role as husband as the primary dharma or he could take his role as king as primary dharma. The two are in opposition. If he chose to act as the husband of Sita, then he had to relinquish his role as king and live happily with Sita as husband and wife. We may think that this is the right choice if we give credence to our emotions. However, if he were to give up the role of king, who was there to take it up? Would it have been Bharata? Bharata is the person who had sworn that if Rama did not come back to take his rightful place as king after 14 years of exile, he would enter the fire and immolate himself. He was a person who was prepared for this kind of a sacrifice.

Lakshmana and Shatrugna were not choices either. In that case, what would happen to the kingdom? It would be left headless and such a kingdom would soon be destroyed. In the ‘Dharmasastras‘ it has always been prophesied thus. In these circumstances, Rama could choose only one course of action to uphold dharma. He had to make his dharma as a husband secondary to his primary dharma as a king. He had to abandon Sita (in fact Sita had expressed earlier that she would like to go and live in the forest for a while, especially close to the ashrams of the great rishis who lived in the forests)and bowing down to his primary duty, he took action.

One has to carefully observe how Rama lived after that incident. At the time, Rama was only 39 years old. If he wanted to, he could have married again. A king is allowed to have multiple wives. His own father Dasharatha had 3 wives and 360 concubines. However, Rama as a patnivrata husband refused to give in to pressures and numerous temptations from various quarters that would naturally have been put on him, to get married again. During the time of yajnas, he used to have a golden murti of Sita made, to be seated next to him since yajnas require the husband and wife to be together for its conduct.

“The Ikshvaku dynasty has the command of all the kingdoms of this world. I have only given you the punishment you deserve.”

Is it to such a Rama we impute adharma? Moreover, in the Ramayana, it is clearly mentioned that after Sita’s banishment into the forest, Rama conducted his life as an ascetic. There are umpteen instances where Rama the husband has burst into copious tears whereas Rama the king is totally unmoved. In the public gathering in the palace at the time he has to make the decision to be either husband or king, he proclaims stone-faced that he is going to banish his wife and that if anyone were to protest even mildly, he would behead them. He repeated the same words to his brothers Bharata, Lakshmana and Shatrugna too. However, Rama the husband rushes into his chambers and breaks into uncontrollable tears. His brothers are seen to be consoling the weeping husband Rama.
One needs to read the Ramayana in its original to understand this difference. We need to think by placing ourselves in the shoes of a king and not as ourselves. We must also understand that a king is never free or independent. We think that life is easy and full of luxury for a king. But that is far from the truth. A king is one who is never free. Chanakya clearly says that a king is not a free man. Whatever rishis have transmitted to him through Neetisastras, he has rights only according to that. We, ordinary people, have a lot more freedom than a king.

Swamiji exhorts us to read the Valmiki Ramayana at least once to understand its depth and beauty. He says that it is best to read it in Sanskrit and if that is not possible, then to read any of the translations.

Questioner: Is it ethical for a person to attack somebody in stealth

Swamiji: No, never. It is never ethical to conduct warfare through devious means.

Questioner: Then what about the killing of Bali?

Swamiji: There was no battle between Rama and Bali. If there was a battle between Bali and Rama, then what Rama did would have been considered unethical. The battle or rather the wrestling match was between Bali and Sugreeva. It was when they were engaged in a tussle that Rama shot an arrow that caused Bali to fall to the ground.

It is imperative that we now do a character sketch of Bali. It is only then that we can understand the entire situation. Bali is a very strong person. He is not just strong but his nature is also such that he will accept only what he thinks is correct. He will not listen to anyone else. Unless he felt it was the right course, he would not agree to anything. This character of Bali has been clearly explained in the Valmiki Ramayana.

Rama shot an arrow and Bali collapsed to the ground. When this happened everyone rushed to his side. Rama, Lakshmana, Hanuman, Neela, Gavaya and others all rushed to his side and held him. Bali then exploded and said, “Rama, what did you do? The meat of Vanaras is not edible. Then why did you shoot at me? Why did you commit an adharmic act?” Rama replied, “The Ikshvaku dynasty has the command of all the kingdoms of this world. The famous Dandan is of this dynasty and I am the son of Dasharatha who is his descendant. I have only given you the punishment you deserve as a king of any kingdom would give to his subject for a similar crime.”

Bali put this chain on Sugreeva’s neck to atone for all the wrongs he had committed against his brother.

What was Bali’s crime? While his younger brother Sugreeva was alive, Bali had raped his wife and taken her for his own and was ruling as king. Rama says that he had only inflicted that punishment on Bali that any king would for such a crime as Bali had committed.

On hearing this, the normally tempestuous Bali suddenly became transformed. He said, “Rama, please remove the arrow from me. It is hurting me”. This is a very intense scene in the Ramayana; Rama removes the arrow from his body and starts to gently caress him. There is a chain in Bali’s neck which he removes at this instant and puts on Sugreeva.

Here it is necessary to explain that it is because of this chain that Rama hid behind the tree and shot at Bali. As long as the chain was in Bali’s neck, anyone coming to fight Bali face to face would lose half their powers to him. Bali had this boon. Rama was not one to lose his powers for no reason. His powers were reserved for other bigger things in the future.

It is this chain that Bali puts on his brother Sugreeva who until that minute was his sworn arch enemy.

Bali could have easily asked Rama to put this chain in his son Angad’s neck. Isn’t that the way a father would normally behave? But that was not what Bali did. He put this chain on Sugreeva’s neck to atone for all the wrongs he had committed against his brother. This one act of his purified him like no other for he had passed on the advantage of being invincible to the very person who he had wronged terribly until that moment. He then requested Sugreeva to take care of his son Angad and wife Tara.

Thus, Swamiji explains the two incidents from the Ramayana which many people find hard to accept.

We request you to let us know through your comments if this explanation was useful to you in terms of clarifying some of your doubts.

Disclaimer: The write up is not a word to word translation and in fact, it is not even a minute to minute translation. There are some minutes of the audio which have not been translated as it does not add too much more to the explanation or is not directly relevant.

Source:
Note:
1. Text in Blue points to additional data on the topic. Universities portraying Vaishnavism in negative light: The experience of a Hindu student at a Western University 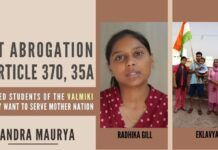 Post abrogation of Article 370, 35A empowered students of the Valmiki community want to serve Mother Nation

Rama belongs even to those who say “Ram Ram” to him.