Now that, Nitish Kumar’s government has been exposed as gruesomely incompetent and awfully corrupt, he seems to have decided to take recourse to politicians’ favourite subterfuge—moralizing

As the nation gets to know about the horrific incidents at the state-funded ‘shelter home’ for girls in Muzaffarpur, Bihar Chief Minister Nitish Kumar pontificates about “sin” and “social change.”

Seven months before the TISS filed its damning report, in November last year, a team of the Bihar Commission for Protection of Child Rights (BSCPCR), headed by its chairperson Harpal Kaur, visited the shelter home and smelled a rat

The stories about the inhuman exploitation of the inmates of ‘Balika Grih’ run by NGO Seva Sankalp Evam Vikas Samiti are being uncovered. Along with the clout the main culprit, Brajesh Thakur, enjoyed in Kumar’s government. And yet the Chief Minister has the cheek to say, “What kind of mentality people have!… It is a sin, an abomination that has ashamed the entire state. We need to plug loopholes so that such crimes are never repeated.”

But what kind of chief minister are you, Mr Kumar? Thakur kept torturing, raping and pimping the young girls, many of them in preteens, but the police, state intelligence, social welfare department, local administration—indeed the entire state apparatus—didn’t get a clue about the horrible atrocities the inmates were subjected to. Your administration kept showering the vile thug with contracts and advertisements for the rags he printed. And it was the Mumbai-based Tata Institute of Social Sciences (TISS) that uncovered the scam in June.

Seven months before the TISS filed its damning report, in November last year, a team of the Bihar Commission for Protection of Child Rights (BSCPCR), headed by its chairperson Harpal Kaur, visited the shelter home and smelled a rat. “We could not make out the extent of malaise that is now emerging from there, but the girls did cry before me without opening up much, as the caretaker Madhu Kumari, who is now wanted in the case, was present and did not allow others to speak. She was interfering a lot and I had to ask her to keep mum, as the girls were virtually caged there,” Kaur told Hindustan Times (August 2).

Kaur has blamed the administration for ignoring her report. “Had the officials concerned acted when we raised the red flag in case of Muzaffarpur shelter home, things could have improved by now,” she added.

The crime has left us with a sense of shame and guilt. We want the CBI probe to be monitored by the Patna High Court

The district administration not only disregarded the BSCPCR report but also recommended Madhu Kumari, now absconding, as one among three “ati vishisht (very special)” women for the Zila Mahila Samman. The award is given to women for outstanding contribution in social service.

“I also held a meeting with DM [District Magistrate] and all officials concerned. The girls did appear tormented, though they did not speak about sexual abuse then, may be out of fear. Still, seeing their condition, I did ask how the girls stayed there for beyond four months and why efforts were not made to unite them with their families,” she added.

So, this is how the administrative machinery under Nitish Kumar’s watch functions. And his cheerleaders present him as “Sushasan Babu,” a good administrator!

Now that his government has been exposed as gruesomely incompetent and awfully corrupt, he seems to have decided to take recourse to politicians’ favourite subterfuge—moralizing. “The crime has left us with a sense of shame and guilt. We want the CBI probe to be monitored by the Patna High Court.”

By “us,” however, he doesn’t mean his administration: “All of us need to work together to bring about awareness and social change. We need to be very careful. There are some people who indulge in bad deeds for power or money. The society needs to be alert.”

Notice “all of us.” The message is clear: The District Magistrate and other officials have not failed; all of us have. What is needed is “social change,” not meaningful reform in governance.

While the entire country is outraged, Nitish has absolved himself of any responsibility. 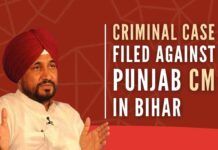 The Real Scandal of Trump Paying No Taxes

Are Hindus under siege in Andhra?