The Shia Wakf Board on Friday told the Supreme Court that it was ready to forgo one-third of 2.77 acres of disputed land allotted to it by the Allahabad High Court to Hindus for construction of a Ram Mandir at Ayodhya. The five-judge bench headed by Chief Justice Ranjan Gogoi, which concluded hearing of arguments from the Hindus’ side, was told by the Shia Board that Mir Baki, a commander of Babur, was a Shia and was first ‘Mutawalli’ or caretaker of the Babri mosque as he had constructed it.

“I am supporting the Hindu side,” lawyer M C Dhingra, appearing for Shia Wakf Board, told the bench, also comprising justices S A Bobde, D Y Chandrachud, Ashok Bhushan and S A Nazeer, on the 16th day of the hearing in the Ram Janmbhoomi-Babri Masjid land dispute case.

He said the high court, while dividing the disputed land into three equal parts, had given one-third share to Muslims and not to Sunni Wakf Board and hence, it wanted to give its share to Hindus on grounds including that Babri mosque was a Shia Wakf property. The lawyer representing the Wakf Board said that without prejudice to what Hindus have argued, Shias do not claim their right over the property under the doctrine of adverse possession as Shias were in possession of it till 1936 and moreover, the first and the last ‘Mutawalli’ were Shias and no Sunni was ever appointed caretaker.

Dhingra, however, said the disputed property was registered as Sunni Wakf without giving any notice to Shias and later the Shia Board lost the case in court in 1946 on the “slim ground” that it had appointed a Sunni Imam. “What is going to follow from this? Do we need to see all this,” the bench then asked.

“I am seeking leave to challenge the decision of the high court denying the right of Shia Wakf over the property,” Dhingra argued.  “You have filed a Special Leave Petition (appeal) challenging more than a 70-year-old order,” the bench said.

Arguments are set to resume on Monday. 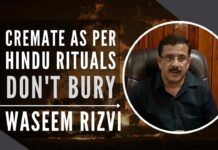 Waseem Rizvi, Former Chairman of Shia Waqf board expresses his desire to be cremated according to Hindu rituals after death