[dropcap color=”#008040″ boxed=”yes” boxed_radius=”8px” class=”” id=””]T[/dropcap]he Loot of Indian sculptures, manuscripts, artefacts etc., are being stolen since centuries, Mughals started the loot then followed by the colonials and now it is done by our own countrymen.

As these are being smuggled and sold in the international markets for millions of dollars and have found the place in museums across the world. After all the smuggling, we have a positive sign as the reports are just coming out of the historic return by America of over 200 cultural objects to Indian Prime Minster Sri Narendra Modi in DC last night. These were smuggled out of India by now notorious art thief Subhash Kapoor.

The Ceremony is bound to go down in the Media with lot of chest thumping but the real monuments men who were instrumental in its return are likely to be forgotten – like what happened to when then Australian Premier Tony Abott returned the Nataraja and Ardhanarishwara, When German Chancellor Angela Merkel returned the Kashmir Tengpura Durga or when Singapore returned the Uma. [dropcap color=”#008040″ boxed=”yes” boxed_radius=”8px” class=”” id=””]T[/dropcap]he Indian Minister of Commerce in his own submission to Parliament India brought back 18 Artefacts from Independence to 2015 (the actual number should be 21 – thanks to some glaring omissions by ASI!) check this link for more information on Stolen Antiques Of this 21 – 7 were the efforts of the India Pride Project.

This was the situation highlighted almost as a lament by the CAG report of 2013.

[dropcap color=”#008040″ boxed=”yes” boxed_radius=”8px” class=”” id=””]D[/dropcap]uring joint physical inspections, we found that 131 antiquities were stolen from monuments/sites and 37 antiquities from Site Museums from 1981 to 2012. We also found that two Buddha statues and one Garuda statue from Patna Circle were lying with Araria Police Station since 2005. Similarly four antiquities of the Indian War Memorial Musuem,Red Fort Delhi were with the Daryaganj Police Station since 1989

The ASI informed that FIRs had been lodged for all missing antiquities. Immediately after report of theft of an antiquity, look out notices were also issued to all the enforcing agencies, custom exit channels and CBI-Interpol. However, we observed that in similar situations, worldwide, organisations took many more effective steps including checking of catalogues of international auction house, posting news of such theft on websites, posting information about theft in the International Art Loss Registry, sending photographs of stolen objects electronically to dealers and auction houses and intimate scholars in the field.

We found that the ASI had never participated or collected information on Indian antiquities put on sale at well known international auction houses viz. Sotheby’s, Christie’s, etc. as there was no explicit provision in the AAT Act, 1972 for doing so. We noticed several examples of antiquities of national importance being sold and displayed abroad. (Idol of Saraswati pertaining to King Bhoj is in British Museum, London).

Many countries had started aggressive campaigns to recover their treasures. Italy, Greece, China etc. had made initiatives in this regard. The Ministry did not have strategy for such proactive action.

As part of its responsibilities, the ASI was also a nodal agency to retrieve stolen or illegally exported art objects. From 1976 to 2001, 19 antiquities had been retrieved by the ASI from foreign countries either through legal means, indemnity agreement, voluntary action or through out of case settlement. But after 2001, the ASI had not been able to achieve any success.

Lack of Database on Antiquities

[dropcap color=”#008040″ boxed=”yes” boxed_radius=”8px” class=”” id=””]W[/dropcap]e noticed that as in the case of protected monuments, the ASI was not aware of the total number of antiquities in its possession as no database or inventory of antiquities had been prepared by the ASI. Branch wise lists were also not available with the antiquity Branch at the ASI HQ. In the absence of any centralised information, there was a high risk of loss of antiquities.

The Ministry stated (May 2013) that the centralised data of antiquities would follow only after the completion of digitisation process which is underway.

For more information on CAG Reports

But this event in America changes the game – for they will be returning not 1 or 2 but 200. This is more than India could have expected thanks for the efforts of the Team India Pride Project and of course our Modi Govt. to get our heritage back to our Country. How have things changed –

It’s the coming together of a group of concerned individuals as the IndiaPrideProject and the support of one man dubbed Americas Indiana Jones.

We now relate the efforts of this group that has led to the return of the Chola Bronze Ganesha and the Saint Manikkavasagar.

[dropcap color=”#008040″ boxed=”yes” boxed_radius=”8px” class=”” id=””]A[/dropcap] non-descript city block in Nyc holds the office of a key player in not just India’s battle looting of its cultural treasures but the very epicentre of the Global struggle and America’s spear head to clamp down on the growing trade in illicit antiquities – tucked on the upper floors, the quaint 5 by 5 office space crammed with Indiana Jones memorabilia, paper clippings of art heists with fancy code names – “Mummy’s Curse” and “Hidden idol” overrun the crammed office space. The overflowing dealer catalogues and books on art dwarf the struggling PC bear mute witness to the efforts of this hero – special agent Brenton Easter. An Excellent post on Real life Indiana

Tucked under his signature baseball cap with the initials B, the pursuits of this one man army has all the bearings of a Hollywood thriller – with a flood of raids , seizures and restitutions spanning the globe – from Italy, Cambodia and now India ! His only lament was “Get me a good counterpart in India – I just need someone willing to go the distance”
For too long the red tape of Indian Bureaucracy and the ill-equipped custodians have sent him on wild goose chases – including multiple weeks in hot and sultry India, with promises of arrests of the bad guys ! Frustrating when he had done all the hard work and with irrefutable proof of the bad guys shipping documents, email exchanges, bank transfers , it was heart breaking to see the patchy attempts in delaying and letting the actual crooks go off the hook. He is single-minded in his pursuit to dismantle the network, the token restitutions are only incidental and unless the law catches up with the actual robbers, the few seizures will be written off by the global players as Cost of doing business!! The US side is saddled by lack of legal support to not just prosecute the criminals but also weighed down by the outdated statute of limitations in vogue in many of its state laws. Things seem to have finally fallen in place with the raid in Chennai this week.

But the little restitution does help to bring the spot light back on the crux of the problem. Optical due diligence by the ultimate buyers – in this case, the reputed Toledo Museum of Art in Ohio and a reputed private collector in nyc.

[dropcap color=”#008040″ boxed=”yes” boxed_radius=”8px” class=”” id=””]T[/dropcap]he red tape buoying down the private efforts of Brenton and India Pride project came to the forefront in the case of Toledo Ganesha – the investigative work of Vijay coupled with Jason Felch helped to uncover the loot in the first place. Indian-born techie Ravi Venugopal managed to get them high resolution photographs which were then matched to the source photographs from the French Institute in Pondicherry.

Though the Museum initially put up a stone wall, in private they wrote to the Indian Embassy and the Indian Ambassador in Nyc. Sadly the letters went unanswered for months which finally led to them going to the Media for help. The Toledo museum took not just the Ganesha off display but handed over hundreds of other items gifted and purchased from the now defunct dealership to Homeland security.

The case of the Manikkavasagar was even more tricky. Just 8 days after it was cleared by US customs in late march 2006, It was bought by a private collector for Usd 650,000 and went off the radar. It was never exhibited or published till mid-2015, when increasing heat from the US law enforcement led to the private collector “voluntarily” surrendering the bronze to homeland security. The identity of the dealer has been protected since he could demonstrate that he purchased the bronze in “good faith” – which in Kapoor’s case, was a fake provenance paper from his estranged girl friend’s art dealership in Singapore dated May 5, 2005, the letter claims the saint came “from a private collection” and “has been out of India for more than 30 years”.
Both the above bronzes were looted from the Sripuranthan temple as did the Nataraja ( returned by the National gallery of Australia) and the Uma ( returned by the Asian Civilisations Museum, Singapore). Many other bronzes taken by the same gang from the Sutamalli temple have been seized by Homeland security in various Art of Past Warehouses and await procedural formalities to return. It is pertinent to mention here that the total number of bronzes stolen from just these two temples is 17 from Sutamalli and 8 from Sripurandan.

There are other objects being returned which include seizures from the Toledo Museum and the Honolulu academy of arts – which we had covered in the just the previous article. You can see how a dedicated team working with an honest officer can usher in major changes and results. Click for more information on Terracotta Yakshi from Chandraketugarh 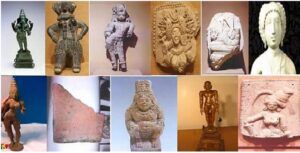 [dropcap color=”#008040″ boxed=”yes” boxed_radius=”8px” class=”” id=””]T[/dropcap]he recent ( and much delayed ) raids on notorious art dealer in Chennai is a sure sign that the wheels have finally started to move in the right direction…but these restitutions are still a miniscule fraction of what is actually being looted and if India has to make a firm stance, it has to immediately:

Why did Rajan approve SBI’s Shariah based Mutual fund?