Revenue foregone in form of incentives and tax exemptions to corporates fell 7.65 per cent

The Budget documents presented before Parliament on Monday shows that the government’s revenue foregone in the form of incentives and tax exemptions to corporates in 2019-20 fell 7.65 per cent to Rs.99,842.06 crore. The revenue foregone stood at Rs 1,08,113.04 crore in 2018-19. Every year’s Budget documents will show what actually previous year earned or spent considering the previous year Budget’s estimates. Though people talk about the current Budget’s estimates, always ignore the actual and estimate of the previous Budget shown in the current Budget.

“Though the revenue impact has been quantified in terms of tax expenditure, it does not imply that this quantum of revenue has been waived by the government. Rather, these could be seen as targeted expenditure for promotion of certain sectors,” the Budget document said. In a chapter titled ‘Statement of Revenue Impact of Tax Incentives under the Central Tax System: Financial Years 2018-19 and 2019-20′, the document said revenue foregone on account of ‘accelerated depreciation’ was to the tune of Rs.50,251.56 crore in 2019-20.

The Finance Ministry in the budget for 2020-21 had projected revenue of Rs.1.33 lakh crore from the telecom sector which was slashed steeply to Rs 33,737 crore in the revised estimates presented in the budget on Monday.

Companies take advantage of various concessions to reduce tax liability, while individuals park their funds in tax savings scheme to cut tax burden, say financial analysts. Revenue foregone on the deduction of profits of undertakings engaged in the generation, transmission and distribution of power was to tune of Rs.14,326.23 crore in 2019-20, compared to Rs.15,513.02 crore in 2018-19, it said.

Similarly, revenue foregone on deductions of profit of industrial undertakings derived from production of mineral oil and natural gas stood at Rs.1,418.12 crore in 2019-20.

Meanwhile, the government slashed revenue expectation from the telecom sector and pegged receipts at Rs 53,986 crore only as per the Budget documents. The Finance Ministry in the budget for 2020-21 had projected revenue of Rs.1.33 lakh crore from the telecom sector which was slashed steeply to Rs.33,737 crore in the revised estimates presented in the budget on Monday.

“Receipts under ‘Other Communication Services’ mainly relate to the license fees from telecom operators and receipts on account of spectrum usage charges. Department of Telecom collects recurring licence fees from various Telecom Service Providers licensed by it,” the document said. The licence fee is levied at 8 per cent of the adjusted gross revenue (AGR) – which is considered as income from the sale of telecom services.

The lowering of revenue estimate comes at a time when the government has set the ball rolling for the spectrum auction in which radiowaves valued at Rs.3.92 lakh crore will be put on the block. The auction in seven spectrum bands for mobile services is scheduled to start from March 1. This means that the government is not expecting much revenue from spectrum auction. As per the Supreme Court’s government is expected to get more than Rs.14,000 crore from telecom companies old dues. 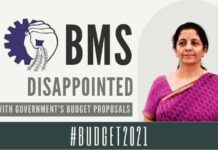 Disappointed over Government policies on FDI, disinvestment in Budget 2021: BMS