[dropcap color=”#008040″ boxed=”yes” boxed_radius=”8px” class=”” id=””]T[/dropcap]he first lot of these refugees are believed to have arrived here more than a decade ago. At that point of time no one raised any objections when they raised their temporary shelters on the outskirts of Jammu.

. . .the emergence of ‘Quit Jammu’ posters warning these Rohingya Muslims and Bangladeshis to return their own countries people like Aijaz Ul Haq and others have once again started feeling unsafe. . .

Gradually, as they started earning their livelihood by engaging themselves with daily labour jobs they started multiplying and their presence in large numbers caught the attention of the security establishment in the state.

Though several senior security experts and serving officers too raised their serious concerns over the issue of illegal settlement of these Rohingya muslims in the communally sensitive muslim majority state of J&K no efforts were ever made to resend them back to their own country.

34 year old Aijaz-Ul-Haq, a Rohingya muslim currently staying in a temporary camp on the outskirts of Jammu city is one of these Rohingya muslims who has seen death from close quarters in his own back yard.

Now with the emergence of ‘Quit Jammu’ posters warning these Rohingya Muslims and Bangladeshis to return their own countries people like Aijaz Ul Haq and others have once again started feeling unsafe even in their second homes.

[dropcap color=”#008040″ boxed=”yes” boxed_radius=”8px” class=”” id=””]R[/dropcap]ecollecting the horror he along with his family had to face in Myanmar Haq narrated his own struggle for survival. According to him, “more than four years ago when the local government in Myanmar had unleashed the gravest atrocities on Rohingyas the entire world silently witnessed the carnage. Our girls were raped, women were tortured, our houses were set on fire and looted, our family members were targeted with sharp edged weapons during crackdown by the army in their home state of Rakhine,” Haq recollected.

Large number of them who came via different routes after fleecing to safety were issued cards by the United Nations High Commissioner for Refugees (UNHCR). Still a large majority, speaking Rohingya language, are roaming around without relevant papers.

Many came to India, and migrated to different cities such as Aligarh, Hyderbad, Punjab, and Jammu and Kashmir. They were escorted across different cities by their local guides who took easy money from them for saving their lives and helping them escape to safest places. According to Mohd Younus, a madrasa teacher currently staying in Narwal bala area of Jammu said, after we crossed Bangladesh border we entered Indian territory from where we boarded different trains.W ehad no idea where was train heading. Some went to Hyderbada, some landed in Aligarh and i along with several others reached here in Jammu.

Large number of them who came via different routes after fleecing to safety were issued cards by the United Nations High Commissioner for Refugees (UNHCR). Still a large majority, speaking Rohingya language, are roaming around without relevant papers.

Recently, Minister of State in the Prime Minister’s Office (MoS PMO) Dr. Jitendra Singh too had demanded a thorough probe in the matter to ascertain their antecedents.

Like Haq another Rohingya muslim Mohd Yunus said “I am working at a scrap-dealer’s shop to earn my livelihood. He said my elder daughter and wife are also earning money by doing domestic labour.”

He said we are satisfied and happy because we are alive. If we had decided to stay back we would not have survived the atrocities.

45-year-old Shah Alam ,also staying in one of the camps said now over 5000 Rohingya muslims have been staying in Jammu. He said a group of people are running a madarsa for Rohingya children in Narwal Bala, where a sizeable number of these stateless people live.

According to him about 3 million of the 4 million Rohingyas in Myanmar fled to Bangladesh, India, Saudi Arabia, Malaysia and Thailand to escape the persecution.

The insecurity grew after one of the two foreign militants killed in a shootout in south Kashmir in October 2015 turned out to be a native of Myanmar.

Commenting on their stay in Jammu large number of Rohingya muslims claim, “our biggest achievement is that we have all survived the gruesome attack and staying alive here in Jammu. we get almost all our daily requirements in zakat (charity),” said Mohammed Shaiq, a 43-year-old father of three children said, “We don’t get any state assistance because we aren’t Indian … but still Jammu is hundred times better than Myanmar….at least we are alive, getting two square meals and a shanty to live in.”

According to J&K Chief Minister Mehbooba Mufti about 13,400 Myanmarese and Bangladeshi migrants are living in camps in Jammu.

However, security forces see this Rohingya population as a potential threat in the militancy-hit state close to a hostile neighbour.

The insecurity grew after one of the two foreign militants killed in a shootout in south Kashmir in October 2015 turned out to be a native of Myanmar.

According to the police case, on 13th November 2014, when police party of R. S. Pura Police Station was on patrol duty at about, 9.30 pm at Rangpura Nai Basti, R. S. Pura, an unknown person on sensing the presence of patrolling party, tried to escape, but after a short chase was apprehended. On questioning he disclosed his identity. However, accused could not produce any document required for such entry or stay within the territory of India. Therefore, on the basis of docket, a case being FIR No. 211/2014 was registered under Section, 14 Foreigners Act and 3/6 Indian Passport Act. 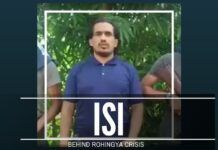 An imaginary conversation between RaGa and Tejaswi

India and United Nations: Need for a review