The Lucknow court has ordered to register an FIR against senior Congress leader Salman Khurshid for hurting the religious sentiments in his book titled, “Sunrise Over Ayodhya: Nationhood in our times”.

The court was informed that an application seeking an FIR against Khurshid was moved at the police station, but the police did not do so, and hence, the petitioner had to approach the court.

Additional chief judicial magistrate Shantanu Tyagi ordered to register the FIR against the former Union minister. The magistrate has said that the copy of the FIR should be sent to the court within the next three days.

In its order, the magistrate said, “From a perusal of the application and the arguments raised in its support, I am of the opinion that cognizable offenses are made out against Salman Khurshid.”

The order came on an application moved under section 156(3) of the Code of Criminal Procedure (CrPC) by local lawyer Shubhanshi Tiwari. Tiwari said in the application filed in the court that Salman Khurshid is a senior lawyer and has held ministerial posts. Some passages in his book Sunrise over Ayodhya are going to hurt Hinduism.

In chapter 6 (d) of page number 113 of the book, it is written that the Sanatan Dharma and original Hindutva of India, which we have been talking about, are recognized as the saints of India. Today we are bypassing that identity on the strength of fanatic Hindutva. At present, a political version of Hindutva has been introduced, which is similar to Islamic jihadi organizations ISIS and Boko Haram. 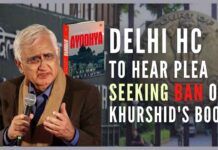