The Supreme Court on Thursday said that it will await the Varanasi District Judge‘s decision on the Gyanvapi mosque committee’s application raising objections to the maintainability of the civil suit filed by Hindu devotees. The apex court also refused to entertain two writ petitions that sought its permission to worship the ‘Shivling‘, which is claimed to be found in the Gyanvapi mosque premises during a court-ordered survey and carbon dating of the ‘Shivling’ to ascertain its age.

The Bench headed by Justice D Y Chandrachud, also comprising Justices Surya Kant, and P S Narasimha said that it is posting for the October 20 hearing on the appeal of the Gyanvapi mosque committee’s plea against the Allahabad High Court order upholding the appointment of a court commissioner to survey the site. The bench said that it has been apprised of the fact that proceedings before the District Judge are still underway and it would be appropriate if the appeal of the mosque committee is kept pending till the outcome of the application, questioning the maintainability of the suit.

During the hearing, the bench told senior advocate Huzefa Ahmadi appearing for the Committee of Management of Anujman Intezamia Masajid, Varanasi, that it will keep the proceedings on the appeal filed by it pending till the District Judge adjudicate upon the objections filed by the mosque committee on the maintainability of the suit under Order 7 Rule 11 of CPC. Ahmadi accepted that there is a remedy under law but said that the High Court order upholding the appointment of a court commissioner cannot be passed.

“It is like a fruit from a poisonous tree. The order of commission survey was ex-facie beyond jurisdiction”, he said, adding, “If I can make out a case that the order appointing commission is illegal, then the report has to be struck off. In my case, there was no situation for ordering a commission report”. The senior counsel said that the court must see what the commission report has led to and the entire area of worship has been sealed.

“The High Court said that the order appointing commissioner is innocuous. A status quo existing for several years has been altered. It has effectively changed the character of the place of worship. This is not one of the cases but it is happening everywhere. Post this order there is a domino effect across the country where similar applications are filed”, he said.

Senior advocate C S Vaidyanathan objected to the submission of Ahmadi and said that he is arguing on a civil suit and not a PIL and he should focus his arguments on the subject matter of the suit. Justice Surya Kant said that the court can direct the trial court to not rely on the commission report while deciding their objections. Ahmadi reiterated that the order of the High Court upholding the appointment of a court commissioner should be set aside.

The bench then posted the matter for further hearing on October 20 and said that it would await the outcome of the proceedings before the District Judge on the application filed by the mosque committee challenging the maintainability of the civil suit filed by Hindu devotees.

On May 20, Supreme Court transferred the civil suit filed by Hindu devotees on Gyanvapi mosque from Civil Judge (senior division) to District Judge, Varanasi saying looking at the “complexities” and “sensitivity” of the issue, it is better if a senior judicial officer having an experience of over 25-30 years handles this case. The apex court said that its earlier interim order of May 17 directing protection of the area where ‘Shivling’ is said to be found and allowing Muslims to offer ‘Namaz’ in mosque premises shall remain in operation till the maintainability of the suit is decided by the district judge and thereafter for eight weeks to allow the aggrieved parties approach the higher court.

The Supreme Court had also directed the District Magistrate to make adequate arrangements for ‘wazu’ (ablution) for the Muslims coming for offering ‘Namaz’ in the mosque in consultation with the parties involved in the dispute. 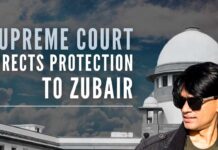