Namaskar. How did Pakistan so blatantly pull off the re-capture of Afghanistan? Many who served in the US Army are seething at the perception that America abandoned Afghanistan. We told you in Daily Global Insights that a lot of arms and ammunition was left behind… India, brace yourself!

Why did Pakistan sign a Ceasefire Accord with India?

What is the role of Pakistan in the sacking of Capt Amarinder Singh as the CM of Punjab?

There is more going on.

The first new initiative after Pakistan secured Afghanistan with Chinese help is try take over Punjab . Using people like Farida Attaullah, TDK was persuaded to remove Amarinder from CM post since he is the obstacle to Pakistan in Punjab. Now Pakis will set fire in Punjab .

I also draw your attention to the baneful influence of one Ms. Farida Ataullah, a Pakistani with dubious connections (during the Benazir Bhutto tenure as PM she was her ‘bag person’), who has been a close friend of Ms. Sonia Gandhi for decades — so much so that she was Chief Guest of Honour at a select gathering at the wedding of Ms. Gandhi’s daughter, Priyanka in the mid-1990s. She lives in Dubai and coordinates all kinds of nefarious activities in and out of India.[2]

Perhaps because of her influence, an important member of the core group of the Congress Party called the Mumbai and Maharashtra police officials to his suite in Oberoi Hotel Mumbai after the 26/11 terrorist attack and directed that “Indian collaboration” in 26/11 should not be probed.[3]

All these facts put together to paint a grim picture of the national security scenario in the country. Pakistan was defeated four times in open military warfare by us but because of corruption in high places today flowing from the well-known “Gangotri”, Pakistan may succeed in undermining our national integrity through such well-placed persons and effect a soft subversion of the Indian nation.

Will, he quit Congress and form his own party? Or will he join an established Nationalist Party like the BJP, which is missing a strong leader in Punjab? Only time will tell. 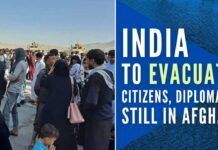