Home Multimedia Videos Sree Iyer on why it is time for Kohli and Shastri to...
Facebook
Twitter
Telegram
WhatsApp

Is your blood boiling yet at being called a fool? I too am a fool – I watch it too. The only difference is that I watch it for the strategy by which the match is fixed, and you think that the game is really being played out there.

Someone, who has spent decades in the fields of intelligence and national security told me that every cricket match is fixed – especially if India is involved. According to this individual, all it takes is 3 people. I am not saying someone threw their wicket away – not even saying that someone bowled intentionally badly; cricket is such as glorious generator of data that betting happens on just about every aspect of the game.

For instance, many might have bet on an India win at Headingly, before the match commenced. If I had bet and seen the first two wickets fall so quickly, I would have cut my losses and sold it. But the diehard romantics that we Indians are, we always quote convenient statistics that this fellow will win the game for us or that bowler will bowl out the opposition cheaply and let our emotions dictate our betting.

While everyone bemoaned India’s batting collapse, no one questioned Kohli for winning the toss on a cloudy day at Headingley, where the ball swings the most, and electing to bat first! By the way, this is not the first time, Kohli did this. In Champions Trophy final, in June 2017, he won the toss against Pakistan and elected to field on a road front of a wicket. Then dropped catches, 13 wides and lacklustre batting at the top ensured that India lost by 180 runs . And at the end of the match, when the Coach Anil Kumble questioned Kohli on his decision to field, he got fired! Again, no one opened their mouth.

When it came to select the next coach, Virender Sehwag, Tom Moody etc. applied for the job. But none of them got it. When asked, Sehwag said that “he did not have any setting with the BCCI! ” Then Ravi Shastri, the eternal go-to-coach of the Mumbai Cricket Manage, was asked to apply and got the job. Reason given was that he was Kohli’s choice . Whatever, it is time that he as well as the Captain go. Kohli can still play at tests if he can make it to the playing 11. Dream on, you say? Watch this video till the end, I will tell you how to fix this. If the coach and captain cannot select the proper playing 11, then what are they for?

How was the match fixed in this case, you ask? After being bundled out for 78, who should have Kohli started out with? Someone who can swing at pace. Instead, he bowled Ishant Sharma, who was slow and kept bowling at the legs of the openers. These are questions that journalists traveling with the team should have asked at the presser at the end of the day. But they won’t. They can’t.

To understand the powerful ecosystem that controls the game, read my book Who painted my lust red? You can get it for Rs. 100 off from Amazon.

TEAM FOR THE FOURTH TEST

Ishant is not 100 percent fit and I said this at the start of the second test itself. If I were selecting the playing 11, I would make the following changes, assuming all pacers are fit.

Prithvi Shaw for Ishant Sharma and

Because it spins at Old Trafford. Jim Laker took 19 wickets in a test on this pitch. And this is a wet summer. He is the best bowler that is now being kept out of the playing 11. I can go on. If you disagree, pl. send them as comments.

But most likely, this is what will happen – they will play Hanuma Vihari (oh! he saved the Sydney test, conveniently forgetting to mention who was batting on the other end), bring another pacer for Ishant and persist with Jadeja. Winning is not the goal here. Making money is.

How to fix this? Stop betting on cricket. Watch the game, enjoy it – just don’t bet on it. Once the honey (betting money) stops the bees (read politicians) will stop. And cricket the game, will thrive. Thanks for watching and buy the book. The sale is for a limited time. 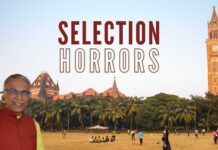 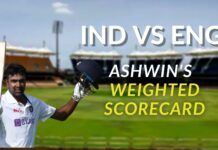 Sree Iyer explains why the 2nd test between Ind & Eng was Ashwin’s test, with numbers