Srirangam Andavan Ashram is one of the foremost institutions of importance in the realm of Sri Vaishnavism and the doctrine (siddhanta) of Vishishtadvaita, as propagated by Ramanuja and Vedanta Desika. The pontiff (Acharya) heading the mutt passed away in March 2018.

A few days later, a mysterious “will” emerged from the precincts of a self-appointed “committee” claiming that the Andavan (Acharya, head pontiff) had authored the will, proposing the names of 3 individuals, one of whom may succeed him as the next Sanyasi of the Srirangam Andavan Ashram. The alleged will nominated the “committee” to execute the will. To the utter surprise of the followers, the committee has informed that the first name proposed in the alleged will happens to not even be a follower of the Andavan Ashram.  A vedic scholar associated for more than 5 decades with the Ashram, on condition of anonymity, told PGurus “the bogus will has not been made public. No religious scholar of the mutt was informed by the Acharya, not even the Sri Karyam (No 2 in the hierarchy, only next to the Acharya) was aware of existence of such a will. This is a sinister design to take over the Ashram and install a “puppet” Andavan (Acharya) who will dance to the tunes of the committee”.

The “committee” is a self-anointed body predominantly consisting of industrialists, chartered accountants and retired bureaucrats. Significantly, none of the members of the committee are scholars in the vedic texts or are familiar with the religious affairs of the institution.

The followers of the mutt, under the banner “Srirangam Andavan Ashram Shishyas Sabha” have aggressively turned proactive to “take back” the mutt from a committee that has no religious authority to run the Ashram. These shishyas gathered huge crowds and convened two meetings – one each in Chennai and Srirangam in July 2018. In both the meetings it was loudly emphasised that the “will” is bogus and there is an urgent need to “take back” the institution from the committee and save it for posterity. In a WhatsApp war that consequently broke out, allegations were hurled that the “committee” has begun compromising on the religious sanctity of the mutt and have been indulging in many commercial transactions including selling of lands and purchase of a school in Srirangam.

Many questions remain unanswered in this entire episode. Why has the will not been made public – not even to the religious scholars of the mutt? Why has no pontiff been appointed even after a lapse of 4 months to conduct the religious functions of the Ashram? Is it true that lands of the Ashram are being sold and a school has been purchased – all in the absence of a head? Is it correct that the committee manipulated the will and have no directions to run the religious or secular activities of the Ashram? And finally, how can a secular, self-anointed body of individuals run the religious affairs of a centuries old mutt?

Subramanian Swamy, BJP leader and Member of Parliament said “I am watching these developments and if need be will approach the court to give back the mutt to religious scholars”.

It will be known in the next few weeks as to whether this institution will be “taken back” by the shishyas and religious scholars of the Ashram to further the cause of propagating Vaishnavism or whether this mutt will sink under the unbearable heaviness of the greed and appetite of certain business interests! 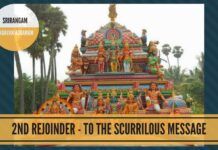 UP vs Bengal and the selective coverage of Main Stream Media...