We are publishing the response received to the article titled “SrirangamAndavan Ashram – Are business interests taking over the religious institution?” which appeared in our website on July 26, 2018. The response was received in an email which we are reproducing here in full.

It has been written by Shri. R Rajagopal who is the Chairman, National Executive Committee of Srirangam Andavan Asramam.

I write to place certain facts about the PGurus article published which is false, biased & one-sided.

It’s very disturbing to read the PGurus article on Srirangam Andavan Ashramam, we believe and respect PGurus always for the courageous & transparent articles, but on this specific one, we feel the PGurus was misguided & misinformed.

1)           The article mentions about self-appointed committee, which is totally & absolutely false propaganda. All committees, trusts exist for many decades, are formed by our late Acharya, HH SrimadSrimushnamAndavan& His Predecessors. Periodically, the committee is reconstituted with different office bearers. The recent Will Committee was appointed by HH SrimadAndavan Swami himself in December 2015 when he was in absolutely good health.

2)           The Will Executors Committee has distinguished members from the Shishyas who are serving Ashram for more than 30 years selflessly. I, the chairman of NEC is the Managing Partner of an 80-year Firm (Aravind Laboratories, manufacturer of EYETEX Group of Cosmetics), have been a Trustee since 1986 & Chairman from 1999 and have no personal interest as I come from a very wealthy background. The committee has Shri N Gopalaswami, former CEC known to be a person of great integrity & his record of public service is unmatched, he is straight forward & a clean person. A retired Chief Commissioner of IT, Shri Ravichandran, long standing Trustees & Secretaries of the Public Charitable Trusts formed decades ago are the Will Committee Members & all of them have been Trustees for many years appointed by HH SrimadAndavanSwamigal. Also, there are other distinguished personalities performing their services to Ashram.

3)           There are few who are trying to fish in troubled waters post the SriVaikuntam attainment of HH SrimushnamAndavan, they want to take control of Ashram. As claimed by few Anti group of Ashram stated in the article, there are no such compromises on religious sanctity, even today the daily rituals as usual are being performed by the Ashram appointed Vedic scholars and all the major religious affairs, Ashram rituals are followed as per the directions given by the Late HH SrimathSrimushnamAndavan. The Vedic Scholars are always regarded with the highest respect and rewarded by SrirangamAndavan Ashram. Its beyond imagination to say that the ‘Will” written by HH SrimathAndavan is bogus. The latest Will was executed in December 2015 while HH SrimadAndavan was of sound mind & disposition & duly witnessed. A few days after executing the Will, HH Called Shri Gopalaswami specifically & informed him of the same & also that he, Shri NG, was appointed as an Executor.

4)           HH SrimathSrimushnamAndavan has very clearly written in the Will who should head the institution after him, Swamy has signed the Will with distinguished eminent Shishyas as the eye witness. The Will stands as very genuine &its the clear direction of HH Andavan on next Pontiff to be Dr. U Ve TSR Narayanachar Swamy. Unfortunately, last few months, Shri TSR Swamy has been threatened by few groups who want to install their choice as Andavan Swamy, even death threat has been issued to TSR Swamy & his family to get away from taking over. So obviously Shri. TSR Narayanachar Swamy, very Saathvik in nature, has been hesitant of taking over. Now Swamy has signalled that he would announce his clear decision within a week, the desperate Anti group is trying all their possible ways now to put maximum pressure to get it blocked.

5)           Dr. TSR Narayanachar Swamy is a very learned expert, holds a Doctorate in Vedic studies (PhD in MimamsaSaastra) & is a Professor in the highly reputed Vedic University in Tirupati (AP), he is known for his Gnanam, Anushtanam& simplicity. These are the obvious reasons why HH has selected the said Swamy as next pontiff in his Will very clearly. Also against the false claim by the Anti group, so called Shishya Sabha that doesn’t hold any legitimacy & not the representative of all Ashram followers,

6) Dr. TSR Swamy is the grandson’s grandson – direct lineage through sons – not through daughters of one of our great Acharyans, HH SrimadChinnAndavan (the 5th Peetathipathi of the Asramam, 1885-1895) so claiming that he doesn’t belong to our Ashram is totally baseless & false. Under his guidance &Acharyakam, the basic tenets of the lineage, namely Gnanam, Anushtanam, Vairakya, AsrithaVatsalyam, peace & universal brotherhood will be embellished & enhanced for the public good. SrirangamSrimadAndavan Ashram has a great lineage of Acharya Guru Parampara& is one of leading institutes in Sanatana Dharma involved in extensive services not just religious, but also in education for poor students, Annadanam, Skill development etc. all over India

7)           The Asramam has centres all over India & abroad with lakhs of followers & well-wishers who revere HH SrimadAndavan as a living God & His word on His Successor vis His Will is sacrosanct. Shri TSR Narayanachariar is NOT the personal candidate of any Will Executor but the Prime Nominee of Late HH SrimadAndavan.

8)           My humble request is not to believe in rumours being spread with vested interest by few individuals. In case required, you could personally talk to Shri. Gopalaswami or I for better understanding on the current crisis. This sensitive crisis should be resolved internally without outside interference & external publicity that could bring in disrepute to SrirangamAndavan Ashram & more trouble in addition to the existing issues of Ashram. 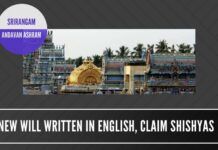