MSRTC workers have been striking for over 100 days

This is the biggest strike in MSRTC’s history and has left the state﹘particularly rural areas paralyzed, and the staffers have been waiting for justice for a long time. Some even committed suicide due to the state government’s negligence towards their demands.

On October 27, 2021, a joint action committee of 27 MSRTC workers’ unions declared a hunger strike which was called off within 24 hours after the committee met with state transport minister Anil Parab. However, more than 90,000 MSRTC staffers from 250 bus depots in Maharashtra went on strike from October 28, 2021. The agitation intensified from November 9, 2021, and MSRTC workers from across Maharashtra gathered at Azad Maidan in Mumbai.

Chaos prevailed outside NCP chief Sharad Pawar’s residence after 100’s of striking workers of the MSRTC held a protest there, giving slogans against the NCP leader, saying that he has not done anything to resolve their issues.

The workers said they are firm on their demand for the merger of the MSRTC with the state government.

Taking the Mumbai Police by surprise, the angry state transport staffers, comprising many women, first staged a noisy demonstration demanding the merger of the MSRTC with the state government and raised slogans against the Maha Vikas Aghadi (MVA), and the Pawar’s.

Then, small groups of employees with many women at the front were seen rushing towards the high-security Pawar residence in Silver Oaks Building, breaking the security barricades, shouting slogans including “Jai Shri Ram“, and pelted stones, hurled shoes at their home, while some managed to reach the main door of the house.

NCP MP Supriya Sule, Pawar’s daughter appealed to them to remain calm, and sit for negotiations.

Soon afterward, a posse of senior police officers rushed there, and brought the situation under control, pushing back the state transport employees who have been on the warpath since the past five months.

The MVA leaders blamed one of their leaders Adv. Gunratna Sadavarte for the assault on the Pawar home despite negotiations underway with the government at the highest level.

“Some 120 MSRTC employees have died by suicide during the strike. These are not suicides, but murders of the state policy. We are firm on our demand for merger of the MSRTC with the state government. NCP chief Sharad Pawar has not done anything to resolve the issue,” an agitating employee of the MSRTC said.

“We respect the decision of the Bombay High Court given yesterday, but we were discussing the issues with the state government, which has been elected by the people. This elected government did nothing for us. Chanakya of this government– Sharad Pawar – is also responsible for our losses,” said another protesting employee of the MSRTC.

The protest comes a day after the Bombay High Court asked the striking workers of the transport corporation to resume duty by April 22.

Following the court order, state Transport Minister Anil Parab had assured that no action would be taken against those workers who rejoin duty by the deadline set by the HC. 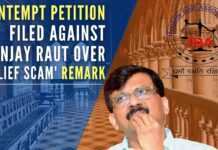