Delhi Chief Minister Arvind Kejriwal on Friday said he was “overwhelmed” by the response of people towards the odd-even scheme here.

[dropcap color=”#008040″ boxed=”yes” boxed_radius=”8px” class=”” id=””]I[/dropcap]” am truly overwhelmed by the response we have received so far. There are very less even-numbered cars on the roads. The plan seems to have been successful,” he told media.

He said the people of Delhi accepted the scheme “whole-heartedly”, adding “I am confident that in next five years people will show the way to rest of the country”.

“Delhi has done it! Reports so far very encouraging. Delhiites! You give me hope that you are capable of achieving big challenges,” Kejriwal said in a tweet.

“I am pooling my car and going to office with two ministers, my personal secretary and my joint secretary,” he said.

Mooted by the Delhi government, the odd-even scheme that allows odd and even-numbered private vehicles on the city roads on alternate days aims at reducing air pollution levels in the national capital. 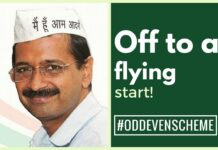