On Wednesday the Supreme Court dismissed the petition challenging the use of Padmavathi Nilayam, a multi-storey complex that was built for devotees of Tirumala Tirupathi Devasthanam (TTD) for the establishment of the Collectorate for the newly formed Sri Balaji district.

The special leave petition was filed by BJP Leader G P Reddy assailing the Andhra Pradesh High Court’s order which vacated the stay on the handing over of the Devasthanam’s property to the district administration.

The Chittoor district administration had identified Sri Padmavati Nilayam, constructed and established by the Tirumala Tirupati Devasthanam for devotees and their accommodation, to house the new collectorate and this was agreed to by the TTD Board on February 17, 2022.

Reddy challenged this before the high court contending that it was against the Endowments Act. He said the Nilayam was built using devotees’ donations and could only be used for them. Hearing the plea, the high court on March 22 asked the Chittoor district administration not to alter the nature of the Padmavati Nilayam. However, it vacated the stay following which Reddy approached the top court.

Amidst a debate over the diversion of temple properties for non-religious purposes, the Supreme Court refused to entertain a plea that challenged the decision of the Andhra Pradesh government to use a complex built for the benefit of the devotees of the Tirumala Tirupati Devasthanam (TTD).

A bench of Justices D Y Chandrachud, Surya Kant, and Bela M Trivedi dismissed the Special Leave Petition filed by BJP leader G P Reddy. “There no reason for this Court to entertain the plea since the main writ petition is still pending before the Andhra Pradesh High Court, and the appeal is against an interlocutory order,” said the bench. “The court must bear in mind the element of public interest in balancing the equities, particularly, at this stage,” it said, refusing to interfere. The bench also pointed out that it was only a temporary measure.

“The government has to make some arrangements when it creates a new district. Some exigent measures have to be taken,” said Justice Chandrachud. Justice Surya Kant added, “The establishment of a new collectorate is a development step. You can’t expect the collectorate to work in a public street or under trees. It’s a temporary measure”.

The counsel urged the court to say in its order that the move will be subject to the final outcome of the petition, but the court refused to do so.

Senior advocate D Seshadri Naidu said it is a religious property that could have been used only for the benefit of the interests of the Tirumala deity or the devotees and not for purposes of state administration. 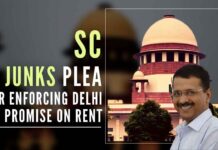