The Supreme Court on Monday dismissed an appeal filed by Devas Multimedia challenging an order to wind up the company. The National Company Law Tribunal (NCLAT) had upheld the earlier order of the Bengaluru bench of the National Company Law Tribunal (NCLT), which had on May 25, 2021, directed winding up of Devas Multimedia and appointed a provisional liquidator for the purpose. The NCLT’s direction came over a petition filed by Antrix Corporation, the commercial arm of the Indian Space Research Organisation (ISRO).

The apex bench comprising Justice Hemant Gupta and Justice V Ramasubramanian dismissed the appeal filed by Devas Multimedia Pvt Ltd, ratifying the tribunal’s order. A few days back foreign investors of Devas have obtained an order from the Canadian court to attach the assets of Air India in US and Canada to get their claims.[1][2]

The NCLT had said Devas Multimedia was incorporated with a fraudulent motive to collude and connive with the then officials of Antrix Corporation to get bandwidth from it by entering into an agreement in 2005, which was subsequently cancelled by the government. This order was challenged by Devas Multimedia and its shareholder Devas Employees Mauritius Private Ltd before the Chennai bench of NCLAT, which dismissed the petition.

According to Devas, what this agreement intended to achieve was first-of-its-kind and tremendous innovation. As a result, Devas introduced and utilized technologies like never before and were a huge revenue generator for Antrix. Devas Multimedia was incorporated on December 17, 2004, by retired scientists of ISRO and controversy erupted over getting contracts on the spectrum of ISRO in 2010.

According to the winding-up petition filed by the commercial arm of ISRO before NCLT, the then officials of Antrix Corporation including its then chairman had executed a contract dated January 28, 2005. This was terminated on February 25, 2011, as it was obtained fraudulently in connivance of the then officials. Investigating agencies CBI and Enforcement Directorate has unearthed fraud in executing the agreement, Antrix had said. The CBI had later filed a charge sheet and ED had initiated PMLA proceedings.

The Ministry of Corporate Affairs (MCA) had also initiated an investigation into the affairs of Devas Multimedia but a stay was granted by the Delhi High Court. 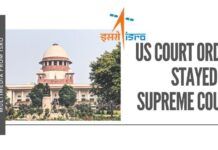 Supreme Court of India stays the order of US District Court granting 1.2 billion dollar compensation to Devas Multimedia from ISRO