The over-use of electronic gadgets is turning modern youth casual, undisciplined and ill-mannered.

The world is full of technical gadgets. Now few people use pen, pencil, diary or notebook. Now all use a mobile phone, digital diary, tab, laptop, or computers for writing and keeping records. There was a time when writing kits, pen sets, or diaries were given as popular gifts but this popular practice has become a thing of the past. This has on one hand killed the market and business of these items and on the other hand-creativity has been killed.

There was a time people used to take pride in their good and artistic handwriting and language skills. But this generation is completely ignorant about this creativity and skill. Diary writing was another art that is altogether forgotten. People used to keep stylish pen and pencils to demonstrate their style and mannerism. This generation has no idea about this taste.

Mathematical abilities and calculation power have been destroyed by the slavery of computers and computers.

There was another family feature when people have different colours of inks and ink-pots and their hands, handkerchiefs, clothes etc also had marks of the ink that they and their children used. Special soaps were used to clean the stains and marks of the inks. Children had special freedom and game to ruin the dupattas, sarees, shirts of their fathers’, mothers’, sisters’ and brothers’ were spoiled by the stains. All such games and naughty pleasures and family love have now vanished with the over-use of technologies. Now users are always tensed about safety due to the high cost and high maintenance cost of the gadgets.

Pen, paper and writing skills give physical and mental satisfaction. If one is an expert in writing and calculations, it develops a certain intense connection about this bond, a closeness that is missing from any other electronic gadgets i.e. computer, laptop, smartphones and calculators. It is the possession and contact of the pen and paper, the flow of ink, the speed of the pen, the alliance and intimacy of all with the human hand and the hand’s link with the mind of the writer vibrates the mind and body with energy. This is all the role of the pen and the significance of the paper. Man’s over-dependence and overindulgence with computers, smartphones and calculators have killed this relationship and broken the joint family into nothingness.

Even if now somebody uses a pen, they use a high-quality one. It rarely spoils anything. People are so lazy now that they do not re-use or re-fill the ink. The used pen is thrown. It is the total casualness. Now, the study table is without ink-pot, eraser, blotting paper, diary, writing pads or sharpener. People are the complete slave of smartphones, tabs, laptops, computers, digital diaries and calculators. Due to this mental slavery, people are crippled, they cannot do any simple calculation without the help of the calculator.

Technology has distorted our lives, mentality, behaviour and persona. Our thinking, memorizing and writing sense are heavily damaged.  We don’t use these technologies judiciously but rather we are over-reliant and slave of them. If they are not with us we become uneasy and annoying. We feel a sense of loss and vacuum around us.

Around a few years back, the bag of school-going children was fully prepared and equipped by their mothers with copies, diaries, pens, pencils, pen-holders, nibs, and ink-pots. All the children had was a pencil box equipped with pencils, scales, erasers, sharpeners etc. Desks in the schools were made with an ink-hole for ink.

Students had to dip the nib of the holder into this ink-hole of blue or black ink repeatedly and then fight away to write few words before again dropping the nib into the ink-hole. Good writing was a prized art. It was a good mental exercise of mind, body, hands, eyes and concentration.

This was a very strenuous task; but this process shaped and produced Dickens, Mark Twain, Shaw, Tolstoy, Kipling, Munshi Prem Chand, Tagore, R.K.Narayan and Dr S.Radhakrishnan —dip and write, dip and write, for days, weeks, months and years. People and writers were very meticulous and careful about handwriting, spellings, grammar, and punctuation so that the readers, compositor, or teacher can understand and appreciate the writing. But smartphones, laptop, tab, etc have killed this art and mental work out.

Mathematical abilities and calculation power have been destroyed by the slavery of computers and computers. Now the majority of people are incapable of solving the easy and simple mathematical calculation without using calculators. The slavery of technology has mentally crippled this generation.

Above all, writing art and skills develops the personality of a person and makes him disciplined and efficient. The handwriting of a man indicates and specify the personality and behavioural aspects of a person. Matthew Arnold, Abraham Lincoln, John F Kennedy, Tagore, Mahatma Gandhi, Dr.S.Radhakrishnan had very good handwriting and everyone knows they were great creative writers and statesmen. On the other hand the handwriting of Hitler, Mussolini and Jinnah was very poor. Their mind and behaviour were also very destructive.

Unfortunately, computers and smartphones have spoiled all these qualities of mind and body. Now, nobody wants to take pains of writing, oral calculations and mathematical calculations.

Computers, laptops, smartphones, and calculators have also killed the art of good teaching. Now teachers are also dependent on these gadgets. Without the help of these gadgets, they are almost handicapped.  There was a time, good teachers used to memorize everything and they used to teach writing on the blackboard, neat and fast. They always emphasized memorising and the significance of good handwriting. Neat and open handwriting develop a cultured, disciplined, organised and orderly mind. Incompetent teachers hide their incompetency behind gadgets.

The mind has become so much crippled due to the over-dependence on technology that to check the copying and cheating Plagiarism Checker Apps are used because human beings have no power of reasoning, memory and judgment now. However, these plagiarism checker apps have only the mechanism to check the copying of the language. However, only a creative mind can write the nonidentical language. They do not have the power to check the coping of points, contents and other major issues. This method is again very absurd like electronic gadgets.

Over-dependence on smartphones are also responsible for a large number of accidents. Thousands of people die every year in accidents using mobile phones. Similarly, the over-use of electronic gadgets is turning modern youth casual, undisciplined and ill-mannered. Educational campuses are full of such Tommies. 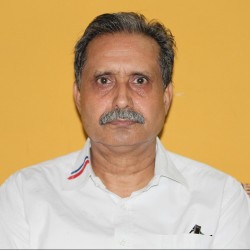 Dr. Yogesh Sharma
Dr.Yogesh Sharma is a teacher and an ex-NCC Officer. Apart from this, he is a poet, story writer, essayist, blogger and author. He believes in universal brotherhood. He loves humanity, social justice, secularism, women’s empowerment and nature. His areas of interest are Education, Secularism, Environment, Human Rights, Women’s Empowerment and Current issues.