From CAA/ NRC to farm laws to Agnipath: The perils of the communication gap

The Agnipath plan seemed an enigma when it was announced. But my analysis now makes me believe that Agnipath is truly a transformative and innovative path to progress, modernization of the military with youth participation, and most of all the potential for a promising future for aspiring youth. I wondered why it was associated with Agni (Fire) which has many different contexts in Hinduism. To me, the most fitting in the present context is that the plan is meant for the only youth with fire in their belly to serve the country.

Reflecting back when I was 17 a long time ago, I wish the then government had the wisdom to propose a plan as promising as Agnipath. For today’s youth what can be better than learning, working, and earning simultaneously. In addition, they will build a skill set like disciplined and healthy living, goal-oriented and team environment, paying attention to details, differentiating between rights and responsibility, etc. In fact, living away from home at that tender age of 17-18 may not be appealing in the first instance but learning to live independently and taking care of yourself is perhaps what everyone needs to experience. Such skills will serve the Agniveers (the fitting name for the chosen few) very well no matter what their future aspirations will be after the first four years.

I not only totally detest but am sad about the street protests, violence, and devastation by our misguided youth against such a well-thought-out plan. More saddening is that India’s self-focused, intellectually deficient, irresponsible, and power-hungry politicians are inciting the youth to distract attention away from their own misdeeds. Recent examples include the ED investigations against the infamous mother-son duo of the Congress party; a similar investigation against AAP party leader, and the use of bulldozers in Uttar Pradesh against anti-national elements causing destruction of public property or for their ill-gotten wealth and unlawfully acquired property. Many cities in U.P. were targets of pre-planned violence after Friday prayers. Obviously, it is in the best interest of these politicians to have the newspaper headlines and narratives focus on the violent demonstration, burning of trains, and lawlessness rather than their own corrupt and criminal history.

It is a travesty that the number of such anti-national, anti-Hindu, and anti-Modi regime politicians and individuals is on the rise. They hide their own past and use the hired youth most of whom are unemployed with little education and poor skills. The youth on the street against Agnipath have little or no intellect and ability to compete for it, no fire in the belly, and are not even of the age to qualify. To India’s political and/ or religious leaders, I say – “STOP EXPLOITING YOUTH” and spare the country from destruction. Why put the youth on the path which may lead to prosecution and thus make their future worse than what it is?

I fully support Agnipath and offer credit where it is due to those who dreamed and planned it. However, they must reflect on what they could do differently and better to avoid, or at least minimize, the damage and violence on the streets. I will accept the criticism that it is easier for me to talk in the hindsight, but I hope that the points below are deemed constructive for the next innovative project like Agnipath. Modi and his team are known for innovation and thinking strategically in the best interest of the country but it came short on many fronts as discussed below:

The government, in my view, failed in recognizing that the 17–18-year-olds are only as mature as their age. They need to be coached that there are no guarantees or free lunches in life. Not everyone has to hold a government job either. Every youth must learn that ‘work is worship’ and no work should be beneath them rather than being unemployed, beggar, or are for hire and exploited by the politicians and others for doing their dirty work.

In conclusion, let me recall a press conference in which the framers of Agnipath were talking about their continuous communication with the private sector, state governments, and others to offer priority in jobs to the 75% of exiting Agniveers after 4 years. He was asked if it was guaranteed and the respondent did a very poor job responding to it. I wish he was clear that the guarantee is as good as the individual’s qualifications and capabilities to meet the needs and demands of the job. Once again, the government must not make promises it has no control over and not make ambiguous statements.

Agnipath, no doubt, is a brilliant path and golden opportunity for India’s youth to succeed but a bit short-sighted in its magnitude. A poor explanation and that too after the cat out of the bag left many frustrated and unanswered questions. Modi and his team known for Reform, Perform and Transform appear to be short on their stated ideals in rolling out a half-baked Agnipath. 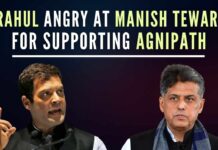 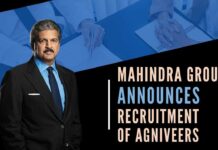 My Letter Series – Dear Indians, Try As They May, The...