Census and caste in the colonial era

In part 1, we noted about the census used by the British empire as an instrument and a political phenomenon that included mutually exclusive ethnic, religious, racial, and caste groups and divided people by geographical boundary. Here, we discuss the major architects of census starting late 1800s when the constructs of castes and subcastes got solidified during the colonial era. The historical context presented below is derived primarily from two sources and the references therein [1][2].

We assume that the census was a well-meaning exercise by the Britishers but its implementation was poor for many reasons. For example, the colonizers themselves did not understand the people of India and thus the questions asked during the census were not well articulated. Arguably, people in rural areas may have poorly understood the questions and self-identified to belong to a caste or sub-caste based on their occupation and/ or brotherhood. It cannot be ruled out that those conducting the census (mostly upper-class Indians) used their own bias and classified people in the given caste and/ or race.

Undoubtedly, the census was a tool to assign people to different social categories affecting their privileges and place in society. Thus, people were contesting to move upward from the “lower” class. For example, the 1921 census was conducted using a category of “depressed class,” resented and contested by many. This is the period of people being more united and challenging British rule (Gandhi had already returned to India). Consequently, the “depressed” category was dropped in the 1931 census and replaced by “exterior” castes with little clarity. The whole system was in constant flux and perhaps it is safe to suggest the census and the caste hierarchical classification continued with little clarity.

It is worth noting that the conversion practices from Hindus to Muslims during the Mughal empires and then to Christianity during the colonial times meant that both the Muslims and Christians of India continued to identify themselves in a particular caste and/ or race. In other words, the caste nomenclature changed with religion but the caste system is not limited to only Hindus as it is perceived in modern society. The British empire, motivated by their desire to control the challenging, complex, and large India, used the census as a tool to divide the majority Hindus leading to the convoluted caste system.

Reportedly, the caste and religious categories were part of the census from the beginning and initially, the caste was equated with class[1]. Later, the sect and tribe were included in the census. In fact, the Scheduled caste (SC) and Scheduled Tribe (ST) became the permanent fixtures of India’s caste system and continue to date. While attempts continued to understand and distinguish between caste, tribe, race, and religion, those categories remained most pervasive and distinct.

It seems that Herbert Risley was the first anthropologist responsible for the census in British India who later authored the monumental book based on his racial theory of caste, “The People of India[2].” This was later criticized and discredited by his contemporary William Crooke. However, the fact remains that Risley and Crooke were the first to publish two handbooks in the 1890s with a lengthy ethnographic glossary with entries for individual tribes and castes. Those handbooks shaped the hierarchical caste system which continues to date in modern India. Later, J H Hutton looked after the census and authored another book, Caste in India: Its Nature, Function, and Origins first published in 1946.

Risley’s caste-jihadism is reflected in his argument that the ultimate origin of caste lay in the hierarchical distinction between the ‘higher’, ‘fair-skinned Aryan’ and the ‘lower’, ‘black Dravidian’, and that the evolution of the division of labor could not adequately explain the system. The data in both handbooks included references to current cast nomenclatures like the Kayastha and Chamar and many subcastes with regional differences. Kayasthas belong to Vaishya varna and Chamars to the Shudras, to the best of my understanding. However, the latter is part of the untouchables, once called Harijan by Gandhi and now part of the so-called Dalits.

In fairness to Risley and Crooke, the descriptions of tribes and castes including traditions, physical characteristics, marriage customs, religion, occupation, social status, and population figures were largely a mixture of their elitist views and the feedback of their assistants on the ground (upper-caste Indians) who conducted surveys? As stated earlier, their own bias colored what they heard, perceived, and finally reported. Thus, the colonial definitions of caste constructs and social change in Hindu majority India cannot be totally ascribed to British jihadism because the natives contributed to the census.

What may seem an oversimplification, the caste system was created by the colonizers with European thought (or White supremacist male view) with ground facts (however distorted they may be) by Indians. It may be safe to suggest that the elitist view of the colonizers was shaped by both European and indigenous thought. It should be noted that only men, Britishers or Indians, were involved in the census and caste hierarchy, indicating the women suppression in 1800s colonial India.

While the caste narratives were constantly evolving through many censuses over time, India’s prominent reformers like Swami Vivekananda (1863-1902), Gopal Krishna Gokhale (1866-1915), and Swami Dayananda (1824-1883) were active in social causes and religious reforms. The next article in this series will discuss how two of India’s eminent statesmen, Gandhi, and Ambedkar, tried to change the cast narrative, particularly, as it relates to the “Dalits.” That will be followed by the caste hierarchy dominating independent India’s political scene and finally the emergence of the Dalit issue in the United States, a major topic of discussion of this series.

[1] Census, Politics and Construction of Identities in India – ResearchGate 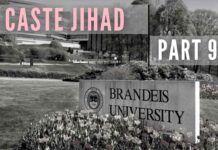 Even Now It’s Not Late